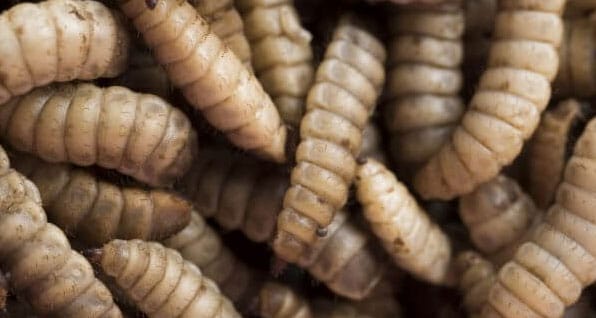 The world urgently needs new and sustainable sources of protein. Two South African entrepreneurs believe one answer lies in the humble fly maggot. Their business, AgriProtein, is already well on the path to large-scale commercialisation of a win-win-win, non-marine-based alternative for livestock and fish farming feed.

Entrepreneur, David Drew, and his environmentalist brother, Jason, have established a small pilot plant near Stellenbosch in the Western Cape, that will be up scaled this year into a trial plant converting millions of the grubs into tons of rich protein powder per day to supplement commercial livestock and fish diets.

Agriprotein Technologies is part of a “new industry called nutrient recycling: using organic waste to create protein” the core of which is a “protein-based feed [derived from maggots] for monogastric [single stomach] animals…. varying neither in protein content nor amino acid composition.”

The fishmeal industry predominantly catches small pelagic fish, which are processed into a highly nutritious powder that is one of the mainstays of commercial animal and fish food production, although opinion remains divided as to the impact the industry has on ocean resources.

Fishmeal as a protein powder is currently unrivalled. While vegetable proteins such as soya and sunflower are also used as supplements, they are less efficient.

The UK’s Sea Fish Industry Authority (SFIA), established in 1981 to assist in supporting a sustainable fisheries industry, said in its October 2011 factsheet that global production in the world’s 300 fishmeal plants “has been around 5 million tonnes of fishmeal over the last four years… This is all produced from about 20 million tonnes of whole fish and trimmings.” Trimmings comprise about a quarter of the content (and about one million tons of fish oil is also produced from the total).

Agriprotein’s MD, David Drew, says that with world population expected to increase from seven to nine billion by 2050, a growing middle-class demanding a greater meat and fish diet, and increasing competition for land for food and biofuel, it was necessary to find a source of protein for fish farming and livestock rearing which did not rely on marine resources.

The maggot farming idea was driven by Jason Drew, author of The Protein Crunch, Civilization on the Brink.

“While we take for granted the imperative to recycle waste paper, glass, aluminium and steel, we have yet to take on board the recycling of waste nutrients. It takes as many natural resources to make the bits of a chicken that we eat as the bits we don’t eat. These and many other nutrient-rich waste products are discarded daily. AgriProtein is leading the nutrient recycling industry by using a bioconversion process that takes ‘free’ waste materials, and turns them into a valuable commodity,” he comments.


R&D with the University of Stellenbosch Animal Nutritional Department started over three years ago and David Drew explains that it took a great deal of time as well as trial and error to get the flies to live together in such substantial volumes and lay their eggs in one place.

“We also had to match the waste product type to the larvae type. A housefly, for example, can lay 1 200 eggs in her lifetime and is a good consumer of almost all abattoir waste; while black soldier flies have the enzymes to break down very starchy waste like vegetables.”

AgriProtein has an operational pilot fly farm and larvae growth facility – with an output of 2t per week of larvae protein – near Cape Town, and is also setting up an industrial-scale plant capable of manufacturing the large quantities – 100t/day of wet larvae and 25t of pure dried protein – required by the local chicken and fish farming industries.

It also envisages a rapid technology roll-out to Germany, Saudi Arabia and the UK, which are all reportedly very interested in the concept.

AgriProtein’s production starts with cages of breeding stock flies who are fed a mixture of sugar and milk powder and kept in a very sterile environment.

A single female fly can lay 750 eggs in under a week, which will hatch into larvae that grow in weight over 400 times in just a few days ie one kilogram of eggs will turn into 380kg of protein within three days of hatching.

Larvae go through three life stages in a 72-hour period: from egg to larvae (wriggling), pupates into hard shells (hatching) and through metamorphosis into the next generation (maturity)”.

They are harvested just before becoming pupae, then heated and processed to emerge with the consistency of a fine “talcum powder”, with one ton of the product requiring about five tons of maggots, or “about 200 million of the little critters”.

A major challenge has been to develop an engineering solution to ensure that all of the eggs are the same age at the same time – as older larvae kill off younger larvae. They also employ a different regime in terms of feeding; heating, moisture and air extraction control every 12 hours to suit the larvaes’ life stage development and to promote optimum growth.

“We extract the larvae from the growth trays at 72 hours, dry them in a fluidised bed dryer, mill them into flake form and then pack them according to customers’ preferences,” Drew explains. “Although our equipment is very specific, quite industrialised and requires some local bespoke manufacturing, the modular design of our plant and machinery does enable plants to be built to suit any location. Each line can produce up to 10t of larvae protein per day.”

Magmeal – the brand name of the maggot feed – is packed into 50kg bags or containerised solutions in bulk dried powder form – so that customers can mix it with other nutrients to create a final feed product that meets their specific needs.

Using different processes and fly families, AgriProtein has developed larvae of naturally different chemical and mineral composition. These minerals are bio-available to the animals eating them – opening up the possibility of creating a whole range of speciality feed preparations targeted at specific life stages of industrially-farmed livestock.

Drew says that extensive testing by the university researchers has proven that larvae protein produces better take-on weight and lower gizzard erosion scores in fish and chickens that are fed this natural food rather than current industrial alternatives.

“We will continue our research and development as well as our understanding of feed opportunities through funding specialised post graduate research. We currently have two University of Stellenbosch doctoral researchers focusing exclusively on end product composition through variants in larvae production systems – to help us deliver specialist life stage feeds in dried, mixed and pelletised form.”

One of these researchers is Elsje Pieterse, who says: “Magmeal works exceptionally well and is an easily convertible protein for livestock and fish” and does not contain toxins associated with vegetable proteins.

She adds production of protein for animal and fish feed from other sources (such as hospital and dairy waste) using the life cycle of the fly, was also being researched.

Protein sources for livestock and fish farming are being investigated by other companies, especially in Asia, and include microbial and algal species, as well as silkworm pupae.