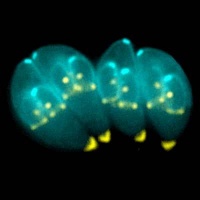 12 May 11 Little-known Toxoplasma can be a ‘silent killer’

Posted at Thursday, May 12th, 2011 h in Food Science, Technology and Ingredients Stuff by admin 0 Comments

When the University of Florida’s Emerging Pathogens Institute (EPI) released a report on April 28 ranking the microorganisms that cause the greatest burden to US public health, many familiar names claimed spots in the top 10: Salmonella, Campylobacter and Listeria monocytogenes all enjoyed prominent ranking, while Clostridium perfringens and E coli O157:H7 were not far behind. The pathogen – Toxoplasma – ranked as the second most burdensome, however, lacks comparable name recognition.

Toxoplasma gondii is a parasitic pathogen estimated to cost Americans nearly $3-billion in medical harm each year – outranked in costliness and annual deaths only by Salmonella – though it receives considerably less media attention than its illness-inducing counterparts.

While it’s most commonly known as a danger when handling the feces or litter of cats that eat wild animals, the parasite is also transmitted to humans via raw or undercooked meats – historically pork and beef.

The Centers for Disease Control and Prevention (CDC) estimates that 22.5 percent of the US population over 12 years old has been infected with Toxoplasma at some point, with half of those infections coming from food. Most healthy individuals infected by the parasite never show symptoms, which typically appear in people with weakened immune systems or newborns whose mothers became infected during their pregnancy.

In developing fetuses, Toxoplasma can cause permanent mental and physical disabilities, and it’s linked to an average of 16 stillbirths and infant deaths each year. When otherwise healthy people show symptoms of infection, they usually arise as mild headaches, muscle aches and fevers, each of which can persist for weeks. People with compromised immune systems, such as those who are HIV positive, can suffer effects such as confusion, seizures and blurred vision.

The data cited in the report does not measure the demographics of those who die from food poisoning, but individuals with severely compromised immune systems likely make up the vast majority of Toxoplasma deaths, said Michael Batz, PhD, lead author of the report and head of Food Safety Programs at the EPI.

Because Toxoplasma is a parasite as opposed to a virus or bacterium, it does not lead to outbreaks the way more prominent foodborne pathogens do, which could help explain why it receives less attention, Batz said

“The news media respond to large outbreaks, but those represent a comparably small number of foodborne illnesses,” he said. “If you were to actually compare the total number of illness cases to just the number of outbreak cases, you’d probably end up with an estimate of hundreds of illnesses out there for each outbreak case.”

Toxoplasma can remain latent in humans for years without developing into an illness, until their immune systems significantly weaken, or it can result in an unexpected miscarriage in pregnant women who don’t show symptoms. These low-profile impacts, Batz said, grant it a status as a “silent killer.”

In the EPI report’s list of the top 10 most burdensome food and pathogen combinations, Toxoplasma and pork ranked second behind Campylobacter and poultry, while Toxoplasma and beef tied for eighth place with Salmonella and produce. Toxoplasma has been linked to an estimated 41 percent of pork-related and 23 percent of beef-related illnesses.

Batz said he thinks the government and meat producers should direct more energy toward reducing the risk of Toxoplasma infections, starting by investing in studies that improve knowledge of the parasite’s sources and the full extent of its impact on public health. He also emphasised increasing education about Toxoplasma, particularly in regard to extra precautions during pregnancies.

“I don’t know how accurate the estimates of congenital Toxoplasma infections are, but for me the concern is: Is the necessary information out there?” Batz said. “Pregnant women hear about it in cats and cat litter, so should they also be hearing about it in regard to handling beef?”

In recent years, incidences of Toxoplasma in pork have declined while its presence has increased in other foods overall. The EPI report cited a 2009 CDC study that found the current leading foodborne risks for Toxoplasma to be raw ground beef, rare lamb and locally produced cured, dried or smoked meats. The study also linked Toxoplasma to drinking raw goat’s milk, eating raw shellfish and handling wild game.

To reduce the risk of Toxoplasma and other foodborne infections, the CDC recommends cooking meat to the recommended internal cooking temperatures, freezing meat to sub-zero temperatures before cooking, and washing hands and utensils with hot, soapy water after contact with raw meats and unwashed produce.

The protozoa that could be controlling your brain

….nothing approaches the perfidy of the one-celled organism Toxoplasma gondii, one of the most widespread of all parasitic protozoa. It takes over the brain of its host and makes it do things, even actions that will cause it to die, in the service of this nasty hitchhiker. It sounds like a cheesy Hollywood horror flick, except that it is for real.

We know that illness in general can slow us down, incapacitate us and, in the worst case, kill us. Yet this organism is much more specific. Natural selection has given rise to pathogens that infiltrate the nervous system and change that system’s wiring to achieve its ultimate purpose, replication — like a computer virus that reprograms an infected machine.

Such is the case with T. gondii. It sexually reproduces only in the intestines of cats yet can maintain itself indefinitely in any warm-blooded animal. Infected cats shed millions of their oocysts in their feces. Taken up by all kinds of animals, including dogs, rodents and humans, they infect muscle and the brain to escape attacks by the host’s immune system. Hidden away, they remain dormant as cysts, surrounding themselves with a tough cell wall. Yet this quiet stage of infection, called toxoplasmosis, is deceptive. Violating all rules of good hospitality, these invaders make the host’s brain do things counterproductive to its own survival…..