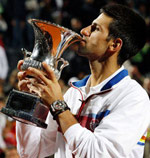 20 May 11 Is a gluten-free diet behind Djokovic’s smash success?

Posted at Friday, May 20th, 2011 h in Health and Nutrition Stuff by admin 0 Comments

No one can match Novak Djokovic on the tennis court. He’s the most in-form player in the world, and his recent win in the Rome Masters was his 39th straight victory in succession. This year the 6ft 2in Belgradian has won seven titles and £3.3m. His success is not just down to his agility, baseline aggression and strong serve, however, but his diet.

Like an estimated 600,000 Britons, the muscular 23-year-old Serbian has coeliac disease, which means he is intolerant to gluten found in many grains. Last month, Djokovic subscribed his new-found success on the court to his nutritionist, Igor Cetojevic, who has steered him away from wheat, barley and rye.

“He’s done a great job in changing my diet after we established I am allergic to some food ingredients, like gluten,” Djokovic explained. “It means I can’t eat stuff like pizza, pasta and bread. I have lost some weight but it’s only helped me because my movement is much sharper now and I feel great physically.”

Unlike most coeliacs, Djokovic has the benefit of knowing why he was underperforming. Around 1 in 100 people in the UK have the disease, but only an estimated 10 to 15 per cent have been diagnosed. There is no cure or treatment for the disease. A change in diet is the only help.

In speaking publicly about the condition, Djokovic has become the world’s most famous coeliac, and living proof that sufferers can not only lead relatively normal lives but can excel. Sufferers of coeliac disease experience an auto-immune response to gluten, a protein in many grains, which irritates the small intestine, sometimes causing symptoms throughout the body. The disease runs in families…..