Lowell Jooste, owner of Klein Constantia, has sold the historic wine estate for €20m to two investment bankers, Zdeněk Bakala and Charles Harman, both affiliated with the Dutch-based BXR Group. KC was purchased in 1980 by his father Duggie, erstwhile importer of Bell’s Whisky, for the right old sum of R3 million.

Located in the cool Constantia region on the Cape peninsula, Klein Constantia is best known for its consistently outstanding dessert wine, Vin de Constance. The winery owns 200 acres of vines and produces 30 000 cases annually of Chardonnay, Riesling and Sauvignon Blanc, along with small amounts of a Cabernet Sauvignon and a Cabernet-based blend.

Vin de Constance, made from naturally dried Muscat de Frontignan grapes, has earned 11 outstanding ratings with Wine Spectator, including 94 points for the 2005 vintage, tying it for the highest-rated wine ever from South Africa. The wine is bottled in a distinctive recreation of an 18th century bottle shape; the wine was one of the favourites of European royalty and the exiled Napolean Bonaparte in the 1700s.

The winery was created from a portion of the historical Constantia estate, which dates back to the 17th century (along with Klein Constantia, the Groote Constantia, Buitenverwachting and Constantia Uitsig wineries are the descendants of the original estate).

Jooste, whose father, Duggie purchased the run-down property in 1980 and restored it to a beautiful and viable wine farm, says as difficult as the decision was to sell, “There was no logical succession in the family; it was time to move on.”

There were several potential buyers, but Jooste was very careful about who the family would sell to. “Klein Constantia covers seven erven; some are zoned for residential use without consultation; I know some of those interested in buying the property had an eye on development. We are very happy that Bakala and Harman want to continue the good work my father started.” 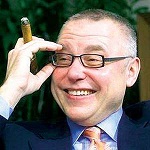 Bakala (left) is a former investment banker from America and the principal shareholder in BXR Group, a private equity group. Forbes rates him the 828th richest man in the world with a fortune of $1.2 billion. Harman is from the UK and was head of UK Investment Banking for JP Morgan until January 2011. He now serves as CEO of BXR Group.

They are long-time visitors to the Cape, and the wines of Klein Constantia have become special favourites. “We are buying the winery as a result of our longstanding links with South Africa, in particular the Cape Peninsula, where Klein Constantia is located, and our appreciation of the wines produced there,” Harman told Wine Spectator. “Vin de Constance is a wine that my family and I have particularly enjoyed over many years, and we consider the farm to be one of the most beautiful places in South Africa.”

According to Harman, Jooste will stay on as managing director and winemaker Adam Mason, who has been at the estate since 2004, will also be retained. “It will be business as usual at the winery. We are not planning any changes to the team or the operations,” he said. “We hope that over time we will be able to support them in producing outstanding wines. We will also be very sensitive to protecting the extraordinary historic heritage of Klein Constantia.”

What does one of SA’s most outspoken wine writers, Neil Pendock, have to say:

“Commenting on Friday’s sale of Klein Constantia, Su Birch, head of WOSA (the wine exporters’ mouthpiece) told Die Burger: “I would even say you can’t get a return on your investment if you buy a farm in Constantia or Stellenbosch today.” Yet another disheartening comment from the head of an organization charged with promoting SA wine overseas.

Up to a point, Su. In December, Klein Constantia’s MD Lowell Jooste told me he sells 13 000 bottles of his iconic Vin de Constance in the UK at £30 a bottle and he’s been replanting the Muscat de Frontignan vineyard to expand production. Quality of wine maturing in barrels is up thanks to improved viticulture and the use of oak from Eastern Europe. Exotic oak which probably sold the deal for Czech-born mining billionaire Zdeněk Bakala.

Eastern Europe knows from sweet wines (think Tokaji) and Zdeněk is just the chap to sell his Vin de Constance in the US and the Ukraine where he is extremely well connected, having bailed out a bust billionaire called Zhevago (this is no joke) in the collapse of 2008. Vin de Constance is seriously underpriced at the minute, both in sticker price and historic terms. It ticks all the Château Lafite boxes (quality, provenance, exclusivity) and will soon be shooting out the lights in global wine auctions if Zdeněk is half the billionaire I suspect he is.

Throw in a couple of containers to China like Hein Koegelenberg has done (his first Leopard’s Leap order to the East is a small R11 million affair, according to informed rumour, and departs next week) and the only small thing about Klein Constantia will be its name. Perhaps the time has come for WOSA to pop a positive pill and consider the strong points of the SA offering they so woefully mis-market at the minute.”