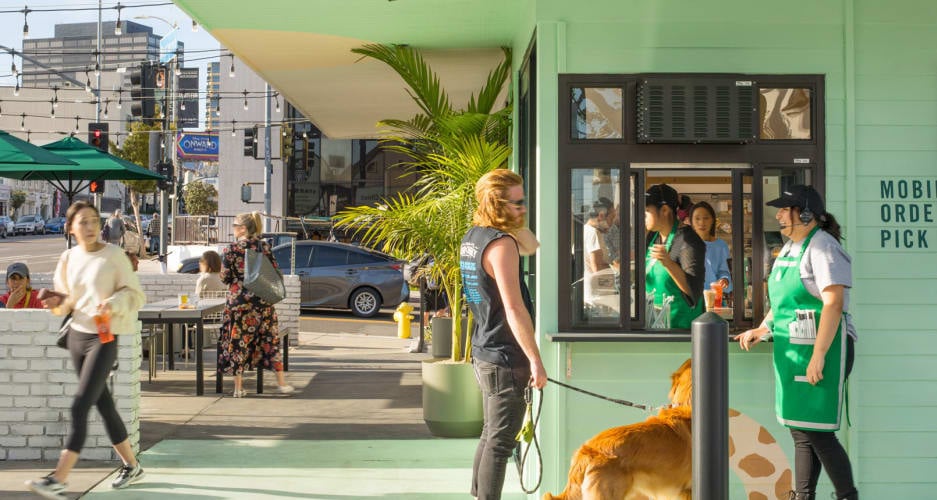 As COVID-19 began to crest in mid-March, Starbucks’s stock plummeted alongside the rest of the market. After all, Starbucks has 15,000 stores in the US and another 4,000 stores in China alone, and it closed cafes across both countries. How could it survive with the world under quarantine?

But thanks to a successful beginning of the quarter, in addition to app ordering, drive-throughs and delivery, Starbucks’s revenue only dropped 5% in the first three months of 2020.

Starbucks survived, the stock has largely rebounded, and it’s considered by some to be one of the safest investments to make today (although it expects results from the current quarter to be much worse).

It’s more than the global need for a caffeine fix that’s kept Starbucks afloat — though that certainly helped. The company has been investing in mobile ordering and easy pickups for years as a strategic counterpoint to being the cozy “third place” to hang out away from work and home.

And now, anticipating that COVID-19 isn’t going anywhere anytime soon, the company is doubling down on convenient coffee buying. Its entire digital order and pickup strategy that was slated for rollout between 2023 and 2025 has been fast-tracked. And as a result, over the course of the next 18 months, Starbucks will begin to look a lot different.

“One thing to know, even before COVID set into place, our business was roughly over 80% grab-and-go,” explains Starbucks COO Roz Brewer. “But we were [already] doing some other work . . . looking at the future of retail and work and trying to decide where are the best places to place our stores.”

In the third week of January, as COVID-19 was sweeping through China, the Starbucks crisis team began considering store closures and how to make operations safer.

Even if you don’t technically drive through, you still might not leave your car. Starbucks will be expanding the curbside pickup options it launched in response to COVID-19 with new digital capabilities and real estate deals.

The company is actually negotiating more parking spots at many of its cafes, so that customers can order ahead with the app, park in a spot the app decides, then get coffee brought to their window. (This strategy will sound familiar to anyone who has done curbside pickup at Walmart.)

As for inside, many Starbucks cafes will adopt walk-up windows (think of this as a walk-up drive-through to avoid people hanging out inside). The company will expand its grab-and-go stores, which consist of little more than a line and a place to get your drink.

And those that reintroduce cafe seating will do so conservatively. A lot of furniture has been removed from cafes for the time being, and the company is trying to determine if customers can be trusted to social distance on their own.

But some of Starbucks’s biggest updates are those you might not even notice and are happening behind the bar, where baristas work. Here, there will be a focus on automation, though not in the sense of robotic coffee brewers.

Instead, a new labelling system automatically imports orders from Uber Eats, the drive-through, or the Starbucks app, funneling them into one queue to streamline processing. Meanwhile, baristas will pull shots with a new espresso machine, the Mastrena II, that Starbucks has been rolling out since last year.

The updated rig, which Starbucks helped design, combines multiple bean hoppers and automatic grind adjustments into one machine, so baristas don’t need to hop from machine to machine depending on the order.

Additionally, these new machines are equipped with sensors that track how many shots have been pulled and when it’s time for maintenance.

These updates may seem small, but they should expedite how fast baristas can work, which is especially important in the morning crunch hours — and when people are waiting in line with their cars instead of in the store….