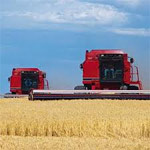 27 Mar 13 Feeding the world is getting easier

A largely unremarked milestone was passed recently. A tipping point, if you will. Unlike all the resource peaks that environmentalists keep threatening are imminent, like “peak oil”, this one is good news. We’ve reached “peak farmland”, writes Ivo Vegter, a leading SA environmentalist journalist.

It was buried, perhaps, by its release in mid-December, as the world went on vacation. It was overshadowed, maybe, by more salacious news, such as “Many see hint of Apocalypse in extreme weather” at IOL, which cleverly, albeit unintentionally, conflated people’s interpretation of bad weather as a religious fear of the apocalypse with their similar primal terror of global warming.

However, “Peak Farmland and the Prospect for Land Sparing”, a paper published in December, offers another excellent indicator that we aren’t in a handbasket headed to hell. Instead, human ingenuity and progress are, for the most part, making the world a better place for all who live in it.

A Reuters wire story about the paper was posted in the science and technology pages of the Independent Online, but I missed it at the time. Matt Ridley wrote about it on his Rational Optimist blog shortly before Christmas, but alas, I was not paying attention. A hat tip, then, to Reason Magazine for picking up on it more recently.

Contradicting the more usual storyline, peddled by UN bureaucrats and environmentalists alike, the paper says that the world has reached what its authors call “peak farmland”. By this, they mean that the expansion of farmland, to keep pace with the increasing demands of a growing world population of ever-greater prosperity, has stopped.

“We believe that humanity has reached peak farmland, and that a large net global restoration of land to nature is ready to begin,” the lead author told an audience. “Happily, the cause is not exhaustion of arable land, as many have feared, but rather moderation of population and tastes and ingenuity of farmers.”

Despite the similarity, the term is not to be confused with environmental doom-mongery about peak oil. This is the term they came up with to explain away what to environmentalists, perversely, proved to be a problem, namely that we’re not running out of resources. It points to a notional peak at which some analysts speculate that oil production will begin declining. At this point, environmentalists seem to suggest, a starving humanity will sit on its bony botty, wondering what happened to the next taxi to the KFC in town.

Those of us who thought technology would likely continue to improve, and that the price mechanism in any case exists to respond to resource scarcity, by reducing demand for those resources, making alternatives economically attractive, and drawing investment into new production research, were derided as deluded cornucopians.

Forty years ago, eco-catastrophists warned us that we’d reach the limits to growth. Twenty years ago, their predictions having failed, they repeated them……

Ivo Vegter is a columnist and the author of Extreme Environment, a book on environmental exaggeration and how it harms emerging economies. He approaches issues from the perspective of individual liberty and free markets.