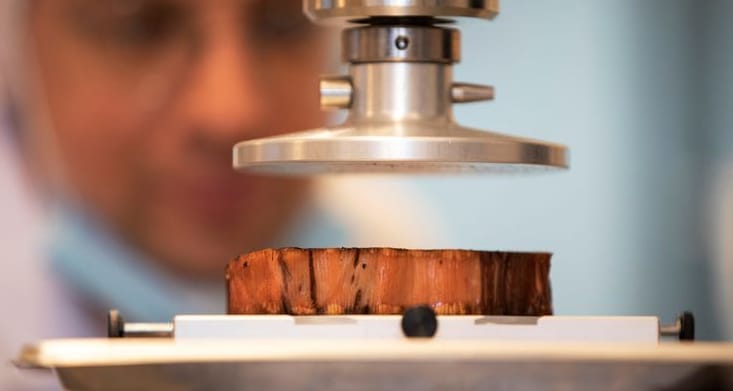 14 Jul 20 Coming soon to a 3D printer near you: plant-based steaks

The Rehovot-based company said it will start testing the beef, which it calls Alt-Steak, at select high-end restaurants in Israel later this year. The product will be offered as part of a chef’s dish, with the option to order the printed plant-based steak instead of the regular meat choice, according to Redefine Meat CEO and co-founder, Eshchar Ben-Shitrit.

With feedback from high-level chefs and butchers, the company said it will then ramp up production of its 3D meat printers and alt-meat formulations ahead of market distribution in 2021.

“Redefine Meat developed a unique 3D printing technology that the company uses to develop and manufacture Alt-Meat. The process brings together industry experience in food engineering and additive manufacturing with a digitally-driven machine – but that’s the only similarity to 3D printing,” Ben-Shitrit says.

“The technology isn’t about creating shape, but actually creating a macro-structure that can combine a desired texture with a desired flavour, in addition to several other sensory parameters that are required.”

The company is committed to “creating a tasty and affordable plant-based alternative to steaks, one of the most cherished food products and the driver of the entire meat industry,” Ben-Shitrit says.

“To enable mass adoption, we knew that creating an alternative meat product that was both high in quality and nutritional composition would require new technologies and production processes never seen before in the food industry,” he adds.

Collaborating with Givaudan has led to the creation of an Alt-Steak product that is not only “healthy and sustainable, but also offers the satisfying flavours, textures and aromas of eating actual meat,” Ben-Shitrit adds.

“Eating food, and especially beef, is considered the most complicated sensory experience,” says Ben-Shitrit. “It essentially combines physical elements (texture, temperature, amount of liquid) with chemical elements (flavor, smell, taste). If this isn’t enough, they are all changing while we eat from the process of eating, and have interaction with each other.

“Replicating Beef requires getting a ‘good enough’ score in almost all parameters simultaneously. If you have the perfect texture but the flavour is sub-par, the score will not be 70 percent, it will be 0 percent.

“We had to work hard to have great texture, and then combine the right flavour, and work on look, followed by cooking behaviour. We still have room to improve on all fronts but have passed the threshold we believe was the most critical.”

Redefine Meat uses special “ink” and 3D printers to print the steaks. The printers use three separate formulations, or “ink”, which the company calls Alt-Muscle, Alt-Fat, and Alt-Blood, to print the meat. These formulations are made from natural, sustainable and widely-consumed plant-based ingredients, the company says.

Redefine Meat has a bank of special 3D models corresponding to different beef cuts. These models are loaded on the machine together with the Alt-Muscle, Fat, and Blood. The machine then starts the printing process according to the file, creating the food product dot by dot and then layer by layer “with a click of a button,” Ben-Shitrit says.

“It’s mesmerizing to see how at the beginning you have nothing, and then you have something. As simple as it sounds, in the food industry it doesn’t work like that at all.” he addd.

Redefine Meat aims to sell printers and cartridges to distributors around the world and has started working on a factory in Israel to launch a future pilot. The plan is to launch pilots locally as well as in several European countries, Ben-Shitrit says.

Redefine Meat’s new vegan steak announcement “marks the start of a new era in alternative meat – the Alt-Steak era – driven by production processes that will accelerate the development of a wide range of alt-meat whole muscle products and create a sustainable alternative to raising and eating animals,” he notes.

Redefine Meat is one of several companies in the Israeli food tech sector focused on sustainable alternatives.

The company announced in June that it raised nearly $6-million from investors, including one of Israel’s largest supermarket chains, Rami Levy. MeaTech merged with Ophectra Real Estate and Investments in October and now trades on the Tel Aviv Stock Exchange.

Several Israeli startups are also working to develop “clean meat” solutions as an alternative to rising levels of meat consumption.

The company’s tech is based on Professor Yaakov Nahmias’ research at The Hebrew University of Jerusalem. Nahmias has said that Future Meat is the only company that can produce animal fat without harvesting animals and without genetic modification.

Alternative meat sales could reach $140-billion by 2029, about 10% of the world meat market, according to Barclays. Spanish competitor Novameat is also working on 3D-printed plant meat, including a whole-muscle pork cut developed during the coronavirus crisis which disrupted pork supply.