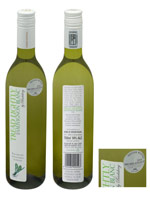 MONDI PLASTICS’ PET BOTTLE COMES OF AGE
Founded by PR personality Lorraine Immelman in 1997, the Michelangelo International Wine Awards started out as a low-key affair. Later deciding to use only international judges, Lorraine approached the management of the Michelangelo Hotel in Johannesburg who were willing to sponsor the awards if the hotel’s name was included in the title. After a few years, Lorraine and her team realised it would be more meaningful to have the judges visit the vineyards and wineries too. So the venue was shifted to Stellenbosch. The first year saw an entry of 146 wines but recent years have seen entries swell to over 1 500 wines.

Backsberg’s Tread Lightly Sauvignon Blanc took Silver at the 2010 event, placing it among South Africa’s best! As the wine tasting is done ‘blind’ by a team of specialists, no bias towards the environmental benefits of the multilayer PET bottle ex Mondi Plastics was involved! Label design is by Zoom Advertising; Paarl Label printed the labels; the metal screw-on closures (with certification seals from the Wine & Spirit Board validating that Wine of Origin requirements have been met) are shared between Auscap (Australia) and Guala Caps (Spain).

EINE KLEINE NACHTMUSIK RECEIVES MAKEOVER
Distell’s Nachtmusik is a rich chocolate ‘spirit filled’ drink that can be drunk as a liqueur or added to desserts or coffee. It can be enjoyed on its own, either chilled or at room temperature, or with a variety of mixers. Both hot and cold milk are equally good as mixers. The product can also be mixed with ice cream and enjoyed as a ‘Don Pedro’ type drink, or poured over ice cream and served as an exciting dessert.

Using the work of the celebrated team of Kevin Farr and his partner Iris van der Vlist of Farr van der Vlist Design, Collotype Labels flexo prints the exquisite labels with Coates/Sun Chemicals inks on FasGloss paper ex Avery Dennison, incorporating Kurz hot-stamping foil (ex Synchron) and high-build silkscreen to add tactile appeal to the title and crest. Consol Speciality Glass supplies the bottles while the applied ceramic label is by Glass Decorations. Collotype Labels was a finalist for its work on Nachmusik in the 2010 FTASA Print Excellence Awards. Repro work is by Polygraphics while MCG supplies the imperious closures.

Who would have thought that ‘snacks’ would go so hi tech as to seduce young users? Now with a pack of Doritos Late Night you can unlock a mind-blowing exclusive performance of Rihanna’s new single, as well as interactive videos by South African band Teargas and other top artists from around the world.

In an explosive global campaign unveiled in South Africa, graphic symbols known as ‘augmented reality markers’ on the back of Doritos new special-edition Late Night All Nighter Chilli Ribs flavour packs enable music fans to experience their favourite artists as never before. Using your webcam, you can activate ‘late-night’ video performances via www.doritoslatenight.com and can personalise your viewing experience by the way you hold and move the bag, inserting yourself into the action as an interactive spectator – the most comfortable position to hold the bag is like you would a steering wheel! Nampak Flexible KZN prints the packs on a Cerutti gravure press, on matt OPP 18μm Toray/GRD 20 from Fima, using Eagle inks. 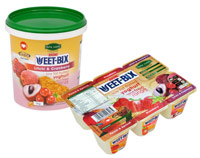 Fair Cape Dairies celebrated its 15th birthday last June. The Loubser family began farming on their Welgegund, Western Cape, farm 130 years ago. Eduard Loubser senior began a small-scale milk farm in the mid-1950s; and Fair Cape became a stand-alone dairy manufacturer in 1995. Since then, it has pioneered free-range dairy in South Africa by ensuring environmentally-responsible practices and ethical treatment of animals. Apart from this, Fair Cape has been at the forefront of popular innovations such as Fair Cape Free Range Rooibos Yoghurt, the first yoghurt to receive CANSA accreditation as a smart choice food. Fair Cape also received 12 awards at the 2010 SA Dairy Championships last year.

Early last year, South Africa’s best-loved chocolate Cadbury Dairy Milk introduced a new matt look and feel consistent with the brand’s global identity across the range. However, Cadbury was obviously keeping the best for last, when it launched and displayed an armada of 180g and 300g variants into stores in the last quarter. Eager crowds gathered around the impressive ‘banks’ of stock to make their choice! Using international designs, the wrappers are gravure printed by Nampak Flexible KZN with Eagle inks on matt OPP/metallised OPP with cold seal to register, supplied by Seal Chemistry.