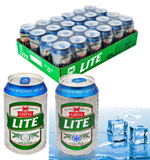 There’s a treat for Castle Lite drinkers this Easter! In 2010, Castle Lite introduced temperature-sensitive thermochromatic indicator labels on 330ml and 660ml bottles that showed when the beer was at a perfect drinking temperature.

To make Castle Lite even more alluring, SAB has introduced a new Castle Lite 330ml can in line with its ‘Extra Cold’ campaign, featuring cold activated ‘snow castle’ icons on two sides, which turn blue to let you know when the beer is refreshingly Extra Cold. To match the magnificent electric blue ring-pull tab and band around the top of the can, there’s a tinted blue liner to further protect the refreshing taste of the beer inside.

There’s a long list of credits for the new Castle Lite can: SAB’s marketing and packaging development team for orchestrating the project; Nampak Bevcan for its role in ‘making it all come together’; Berge Farrell for the design work; Flexothene for the blue-tinted shrink material used for the six packs; and Corruseal and APL who jointly supply the printed corrugated trays.

Dairypack Tubs, a division of Polyoak Packaging, supplies the tubs with its clever insert device (that keeps the feta moist), while Tadbik prints the IML on a Drent Goebel combination offset and gravure press using Actega inks on material from Treofan, Germany. They don’t come much prettier!

It was the classy bottle and label that caught my eye when I did some product photography for last month’s feature on Lithotech. I asked Kevin Swan how it was that a Johannesburg-based company had been chosen to print such an exquisite wine label.

The story goes that 12 years ago his father-in-law, John Mitchelmore, visited the Cape looking for wine labels to print as he had an interest in wine and a passion for producing high-quality labels. During his trips he struck-up a relationship with Ken Forrester and after running his standard labels the T-label came up for discussion. John, always one to accept a challenge, took it on. He first printed the label at Inland Print & Labels, but after selling to Blesston Printing, he continued to print the label there. Following the sale of Blesston to Lithotech, the labels are now produced at Lithotech Labels.

During 2007, Tiger Brands disposed of its interest in dairy processing to a newly-formed private company and DairyBelle was established. During 2008, DairyBelle acquired Dairy World, an independent dairy processor operating in Gauteng. Yellowwood Design, headed up by creative director Richard Stone, started by transforming the logo to ensure that it reflected the new brand positioning and personality. Then, using the ‘blossom’ from the DairyBelle cow as inspiration, the team gave the DairyBelle range, and its sub-brands, a stunning face-lift. 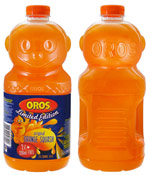 One of my close friends has a son called Harry, who when he was a little boy was terrified of the Oros Man! When he gained weight two years ago, aged 28, his brother Fred pushed him into doing something about it by stating that he now was the Oros man, without a costume! Fortunately the story has a good ending – Fred’s black eye has healed and Harry has trimmed down his waistline.

The Oros Man 2,2-litre limited edition bottle is manufactured at Cinqpet with PET supplied by Hosaf Fibres for Tiger Brands. The 38mm closures are manufactured by African Closures in Cape Town, a division of Polyoak. The bottle is made from an existing preform at Cinqpet and blown on a SIPA machine. Using Paton Tupper’s design, Cape-based SA Litho prints the labels for this delightful promotional offer.

After many years in FMCG sales and marketing, and later in packaging as marketing manager of Kohler Plastics and then Kohler Flexibles, Clive formed his own packaging consulting company in 2000. He also started writing articles for various packaging magazines, and purchased his first digital camera to support his articles. Two weeks later was given his first professional photography assignment – and the rest is history.