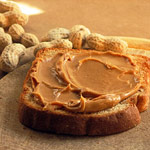 Peanut butter – it has long been one of America’s favourite foods, but new research from Mintel finds the passion has spread from across the Atlantic. Indeed, over the last two years alone sales of peanut butter have rocketed by over 40%, making it Britain’s fastest growing sweet spread.

Amy Lloyd, Senior Food Analyst at Mintel, said: “The growth in popularity for peanut butter has been driven by a number of combined factors. Firstly the recession encouraged consumer purchase, viewing it as an indulgent low cost treat. Secondly, manufacturers have responded to consumer concern over health issues and the emergence of more natural varieties with less additives are helping to reposition peanut butter as a healthier option. What is more, traditional spreads such as jam are facing competition from other spreads such as chocolate and peanut butter which are less dependent on the breakfast occasion and more commonly used in other eating occasions.”

But it is not only nuts which are proving popular with Brits, things are looking pretty sweet for chocolate spreads, which have seen an increase in sales of 41% over the same two years to stand at £31 million in 2010.

In 2010, the total sweet and savoury spreads market was estimated to be valued at £664 million, a rise of 30% since 2005. The spreads market is split almost evenly between sweet (£328 million) and savoury (£336 million). Although sweet spreads are more popular than savoury (only 13% do not eat sweet spreads while 30% do not eat savoury spreads), the higher value of chilled spreadables such as sandwich filler and pâté and their shorter shelf-life has enabled savoury spreads to capture a slightly larger share of the market.

Finally when it comes to savoury spreads, love it or loathe it, sales of yeast spreads have risen by 11% over the past two years. Last year sales of this spread reached just under £50 million (£49 million). The remainder of the savoury spread market is made up of chilled pate, paste and sandwich fillers (£196 million) and cheese spreads (£91 million).