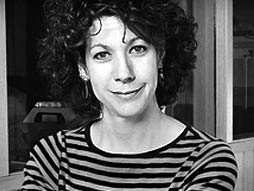 18 May 11 Bacteria are incredibly smart

Posted at Wednesday, May 18th, 2011 h in Food Science, Technology and Ingredients Stuff by admin 0 Comments

Dr Bonnie Bassler of Princeton has done fascinating research on the ability of microbes to communicate and work together. One of America’s top scientists, Bassler is at the forefront of the fast-growing field of “quorum sensing”, the study of how microbes communicate with each other as they go about building the vast interlocking infrastructure of life on which we macrobes depend. Her work has stunning implications for medicine, industry — and our understanding of ourselves. Listen to a remarkable presentation by her… and read an equally brilliant article on her work…

Bassler, 48, has been fabulously successful in her career, winning laurels like a MacArthur Foundation “genius” award, membership in the National Academy of Sciences, a coveted position with the Howard Hughes Medical Institute and the presidency of the American Society for Microbiology. And all that can be traced to her deep appreciation for the power of communication. Messaging is the medium in which Bassler shines.

Bassler is at the forefront of the fast-growing field of “quorum sensing”…. and in recent years she and other microbiologists have discovered that bacteria are not the dull solipsists of long-standing reputation, content to merely suck in food, double in size, divide down the middle and repeat ad infinitum, attending to nothing but their obtuse, unicellular selves. Instead, bacteria turn out to be the original newshounds, glued to their cellphones and Internet chat lines.

They converse in a complex chemical language, using molecules to alert one another to who’s out there, in what numbers and how best to behave given the present company.

Bacteria survey their ranks, they count heads, and if the throng is sufficiently large and like-minded — if there is a quorum — they act. Through chemical signaling, tiny bacterial cells can band together and perform the work of giants. They can compost an elephant, fertilize an oak forest or light up the oceans in the eerie teal glow of bioluminescence. Some bacterial collusions are far less charming and do real harm.

Molecular communication allows 600 different species of bacteria to organise themselves into the slimy dental plaque that leads to tooth decay, for example, and it likely enables the nasty pathogens that cause streptococcal pneumonia or bubonic plague to time the release of their toxins for maximum impact on their human hosts…..

Listen to a brilliant lecture by Bassler here