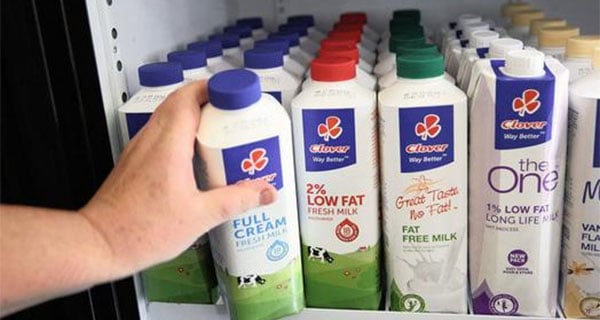 Shares in South Africa’s Clover Industries raced to their highest in almost two months on Friday 19 October after the dairy company said it is in talks with an unnamed firm that intends to acquire all its shares.

Clover, which processes products including yoghurt, beverages, cheese and olive oil, has focused on developing higher margin, value-added branded food and beverages as part of its strategy to move away from lower-margin commoditised dairy products.

The company, which has a market capitalisation of R2.73-billion ($190-million), did not provide further details on the potential takeover, which comes as it recovers from a drought and depressed milk prices.

Clover’s shares jumped as much as 15 percent to R16.40, their highest since September 4.

“It could be one of the private equity funds or one of the big food producers, it is unlikely to be Tiger Brands as they have had more than their fair share of problems,” said Ron Klipin, portfolio manager at Cratos Wealth.

Tiger Brands, which produces grocery brands ranging from peanut butter to cleaning products, shed more than a third of its market value, some R28.4-billion ($1.96-billion), since it was implicated in the world’s largest outbreak of listeria on March 4 which killed more than 200 people.

Clover said it had lost R6.5-million a month in fees earned on services such as production, sales and merchandising and distribution for a competitor, after processed meats were recalled by health authorities during the listeria outbreak.

Klipin said other potential buyers could be Zeder Investments, which holds a 27% stake in Pioneer Food.

Clover spun off its raw milk business last year to form the Dairy Farmers of South Africa (DFSA), in which Clover holds a 26% voting right.

“They have done the right thing over the last couple of years, reinventing the company,” said Klipin.

In September, Clover reported a tripling in normalised annual profit, boosted by its exit from the milk business and a recovery from drought the previous year.

“From an earnings point of view, they are going in the right direction. The last set of results was very positive. Whoever is buying it has definitely come in at the right time,” said Greg Davies, equities trader at Cratos Capital.