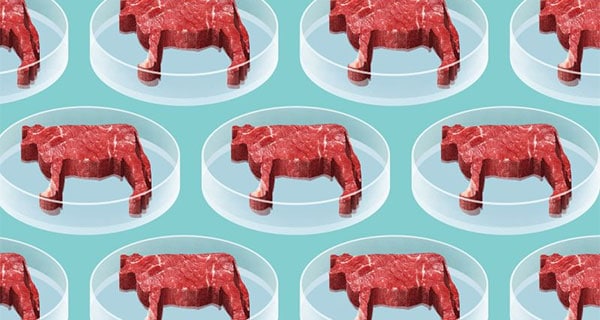 The USDA and the FDA will jointly oversee cell-culture meat technology, senior officials have said. The decision settles a debate between agency officials over which department would regulate the technology, which has drawn investments from major meat companies and skepticism from cattle ranchers and hog farmers.

Cell-based meat is produced using poultry and livestock cells that have the ability to self-renew. Those cells are placed into bioreactor tanks, where they are fed nutrients and oxygen, helping muscle tissue to grow. In a matter of weeks, developers say, the tissue can be harvested as meat and formed into products ranging from beef meatballs to chicken strips.

Regulation of the technology had been in question, with both USDA and FDA officials asserting jurisdiction over it this year.

Startups like Memphis Meats, Mosa Meat, Finless Foods and Aleph Farms are pursuing the technology, working to lower per-pound costs from tens of thousands of dollars to a range that interested consumers would consider.

When cells are harvested, the USDA will regulate production and labelling of meat and other products made from the cells. The agencies will share information as they fine-tune the regulatory process, they said.

“This regulatory framework will leverage both the FDA’s experience regulating cell-culture technology and living biosystems and the USDA’s expertise in regulating livestock and poultry products for human consumption,” the officials said in the statement.

They said new legislation to regulate the technology is unnecessary.

The regulators’ joint approach will help the US stay at the forefront of the technology as companies in Israel, Japan and Singapore also pursue it, said Jessica Almy, policy director for the Good Food Institute, a Washington group promoting meat alternatives.

“We look forward to the day in the not-so-distant future when American families will be sitting down to a dinner of meat made directly from cells,” she said, “courtesy of this new industry that Commissioner Gottlieb and Secretary Perdue made possible.”

Livestock producer groups have called for the USDA to regulate the cell-cultured meat products, and maintain a level playing field with traditionally raised beef, pork and poultry.

“This announcement that USDA would have primary jurisdiction over the most important facets of lab-produced fake meat is a step in the right direction, but there’s still a lot of work to do on this issue to ensure that real beef producers and consumers are protected and treated fairly,” said Colin Woodall, government affairs head for the National Cattlemen’s Beef Association.

Cell-cultured meat developers are part of a new wave of alternatives to traditional meat production, appealing to consumers’ concerns over the environmental impact of cattle feedlots and hog manure lagoons, the billions of tons of feed grains they consume each year, as well as treatment of livestock and poultry.

Startups also are promoting a new generation of plant-based products aiming to better mimic the texture and taste of meat. Beyond Meat, which sells plant-based burger patties and chicken strips, has just filed for an initial public offering that would raise $100-million, and disclosed $32.6-million in 2017 sales.