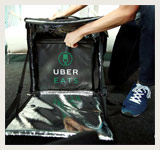 Uber Technologies starts its UberEats food-delivery service in South Africa today before expanding in the rest of the country and into the continent, it has announced.

It will begin delivering meals in the northern suburbs of Johannesburg, South Africa’s largest city, before moving across the Gauteng province and to Cape Town in 2017, Uber operations and logistics manager, Dave Kitley told reporters.

Uber is making an aggressive global drive into takeaway meal deliveries, gearing up with a big staff recruitment campaign to enter at least 22 more countries. UberEats already operates in six countries and will launch in Amsterdam today as well.

Uber launched its ride-hailing service in South Africa in 2013 and since then the service has grown to over 4,000 drivers in Johannesburg, Pretoria, Cape Town, Durban and Port Elizabeth.

Kitley said Uber would look to expand UberEats into Africa “as quickly as we can, but right now no imminent plans for that”.