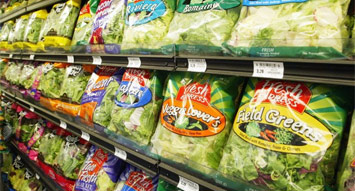 The healthiest foods of all are lacking innovation. Historically, the bulk of agricultural research in the US and elsewhere. has been focused on staple crops, with little help given to efforts to increase yield, shelf life, and convenience for things like leafy greens and squishy berries. Given that government guidelines suggest we should pig out on such produce to stay healthy, perhaps it’s time to dangle a larger carrot in front of vegetable innovators?


In the great quest to get Americans eating healthier, spinach is an unusual success story. We’re consuming four times as much fresh spinach as we were four decades ago, as a vegetable once derided as choke-it-down “good for you” has become a mainstay of home cooking and upscale restaurants.

But the spinach boom wasn’t driven by changing tastes, or the cartoon exhortations of Popeye. It was driven by technology.

Spinach, like many vegetables, is finicky. If you packaged it in the same airtight bags used for potato chips, the leaves would start to break down before they made it from California’s Central Valley to a supermarket in Chicago.

It wasn’t until scientists came up with a special bag—one that controls how much oxygen and carbon dioxide can seep in and out—that pre-washed, ready-to-eat spinach became something that a shopper could grab in the produce section and dump straight into a salad bowl or smoothie.

Spinach, and leafy greens in general, have become so convenient that Americans are actually eating more of them—an impressive feat considering just one in 10 Americans eats the recommended servings of fruits and vegetables each day.

As the country seeks solutions to the obesity epidemic, there’s been plenty of debate about how to get people to eat better. Do we need to improve access to healthy foods? Teach cooking? Tax sugary drinks? But there’s one thing that’s often left out of the conversation: technology.

It might seem strange to think about vegetables as a technology, but they are. The average supermarket produce aisle represents decades, if not centuries, of agricultural research and development.

But in the US, big-league commodity crops like corn and soy, as well as meat, gobble up most of the agricultural research investment from both the public and private sectors.

The USDA’s dietary guidelines tell us to fill half our plate with fruits and vegetables to maintain a healthy diet, but its research priorities are far different.

So-called “specialty crops”—the government’s name for the category that includes, essentially, all fruits, vegetables and nuts—received just 15 percent of the federal research budget over much of the past three decades.

“There’s nothing more important we can do to improve the health of this country than to invest billions and billions into researching the fruits and vegetables that we’re encouraging people to eat,” said Sam Kass, the former White House chef and food policy guru under the Obama administration who now works with food tech startups.

Agricultural research is fundamental to improving how we raise, grow, harvest, process and ship everything that we eat.

It took millions of dollars of public and private research and years of experimenting with limp leafy greens before breathable salad packaging came onto the scene. Consumers no longer have to wash sand and dirt off their greens, remove tough stems and ribs or chop them into bite-sized portions.

The enormous logistical and technological challenges facing so many of the foods that nutritionists tell us to eat make research especially critical for produce, which as a sector is still relatively inefficient.

Apples bruise. Berries don’t all ripen at once. Cilantro wilts. Cherries can split and crack if it rains at the wrong time—a problem that can be so expensive, some growers hire helicopters to fly over their crop to dry the delicate fruit. Many of these crops still rely on increasingly expensive (and oftentimes undocumented) labour to pick them by hand. And water. They need lots of water.

Specialty crops remain special—just 3 percent of cropland is dedicated to growing them—though they make up roughly a quarter of the value of crops grown in the US because they demand higher prices.

This lopsided dynamic means that specialty crops have historically received very little federal research investment compared to their value. It also means the country simply doesn’t have a food system that supplies what we’re told to eat. In 2007, there were about 8.5 million acres of specialty crops in a sea of more than 300 million acres of everything else.

“If Americans were to actually go ahead and jump into consuming the amount of fruits and vegetables recommended, we’d be hard-pressed to meet that demand,” said Sonny Ramaswamy, director of the USDA’s National Institute for Food and Agriculture, which coordinates a large part of the government’s agricultural research portfolio.

“There’s an incredible amount of innovation that we need, all the way from the farm to the table.”

The imbalance is no accident: In a sense, it’s built into the mission of the USDA itself, which frustrates both vegetable growers and nutrition advocates. But there are signs it’s starting to change–if slowly…..