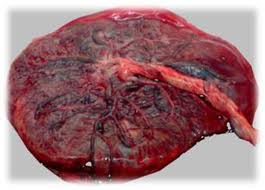 30 Jun 11 The afterlife of afterbirth: notes on eating human placenta

Placentas have been eaten, buried, burned, marched in parades, sung to, dressed in clothing, entombed in pyramids, floated down rivers, and probably a host of other things too strange or mundane to record. In an intriguing article in the edgy journal, meatpaper, journalist, Cynthia Mitchell writes…

“A COUPLE OF MONTHS AGO, my roommate asked me if we could host a placenta dinner. A San Francisco–based group called Adventures in Dining had a placenta donor (an anonymous one; I never learned her name) and needed a location for their adventure.

I said yes. How could I not? Admittedly, I was more intrigued by the mise en scène than by the primary ingredient of the proposed meal. What types of people attend placenta dinners? Is it a somber occasion? Formal? I imagined women in long gowns, chic yet ceremonial, sipping wine and murmuring quietly about their mysteries. I thought it would be magic without being dorky…

All mammals except camels and kangaroos eat their placentas, which made me think ancient humans probably did, too.

The dinner was canceled. We were told, rather cryptically, that the designated placenta had been tainted with formaldehyde. I suspected a hospital worker — someone unaccustomed to women wanting their placenta food grade. I knew a kid in high school who smoked formaldehyde for its PCP-like effect. The thought of ladies smoking placenta and moonwalking around my living room was oddly appealing, but getting high was not the point.

Once I realized my curiosity over the nature of placenta diners would not be satisfied, it struck me that I didn’t really know what a placenta was. I’d imagined some kind of moist, translucent fetus wrapper. When I saw a photo of one, I was shocked.

A placenta is a huge thing, one-sixth the size of a newborn, and it looks like a handbag made of blood. In case I’m not the only one unfamiliar with procreative miracles, a placenta is an organ that grows inside a woman, connecting the fetus to her uterine wall and allowing the developing creature to feed and eliminate waste through the mother’s bloodstream. That may seem obvious and natural, but I can’t help feeling that it’s weird to suddenly grow a disposable organ in which to keep a person you’ve never met.

In the United States, placentas are typically treated as medical waste. Some hospitals hold them for a couple of days, but most throw them out immediately, which struck me as a reasonable thing to do with a used sack of blood.

Then I began to read about people around the world who believe these organs contain powerful, protective, and sometimes dangerous spirits. That we throw such organs in the garbage along with hypodermic needles, cheek swabs, and tongue depressors was starting to seem sad and lame. After all, placentas have been eaten; buried; burned; marched in parades; sung to; dressed in clothing; entombed in pyramids (of their own!); floated down rivers; stolen; sold; used to curse, bless, cure, and beautify; been talked to; not talked in front of; taken on trips; given gifts of pens and needles; taken to school; fed; stabbed; used to make art prints; turned into teddy bears; tied to the heads of children; and probably a host of other things too strange or mundane to record.

Plus, all mammals except camels and kangaroos eat their placentas, which made me think ancient humans probably did, too.

In Deuteronomy, God threatens the Israelites for 54 chapters. He says a woman “will begrudge the husband she loves and her own son or daughter the afterbirth from her womb and the children she bears. For she intends to eat them secretly during the siege and in the distress that your enemy will inflict on you in your cities…..”