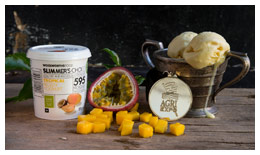 Marcel’s Frozen Yoghurt scooped top honours from all cheeses, butters, ice creams and milk by winning the prestigious title of the 2015 South African Dairy Product of the Year for its Woolworth’s Tropical Fruit Frozen Yoghurt. This was announced at the DuPont Qualité Awards Dinner at Grand West Casino on Wednesday, April 22, 2015.

“It is the first time since the inception of the Qualité Awards in 2001 that a Frozen Yoghurt achieved this accolade”, says Johan Ehlers, CEO of Agri-Expo and organisers of the SA Dairy Championships.

“What makes this award so special is that it was achieved in a year with a record number of 879 entries from 80 producers”, says Ehlers.

For 25 years Marcel’s has been a favourite amongst South Africans, with an extensive range of products, Marcel’s has swirled its way into the hearts of thousands of customers with its award-winning products across South Africa, as well as in Botswana and Saudi Arabia. The first shop opened in Stellenbosch in the heart of the winelands.

Marcel’s frozen yoghurt is infused with probiotics, enabling customers to enjoy their favourite treat with a healthy benefit. Additionally, the fat content of Marcel’s frozen yoghurt has been reduced from 5% to 2.4% in selected products, creating a delectable, low fat product made with natural fruit syrups and flavourings.

61 judges, consisting of sensory evaluators, manufacturers, chefs and food writers had a challenging task to judge 879 products in the Cape Town International Convention Centre on 11 March 2015.

95 of these products were awarded South African Champions and twelve received the Qualité award.

Qualité winners
Qualité is the mark of excellence for dairy products in South Africa and twelve products received the award this year. They are:

“We are very proud to once again sponsor the Qualité Awards, celebrating excellence in the dairy sector. It was very gratifying to learn that last year, more than a third of the Qualité Award winners chose to use ingredients from the DuPont Danisco range in their entries, and this year the level of innovation is higher than ever,” says Kieran Quinn, Sub-Saharan Africa Sales Director, DuPont Nutrition & Health.