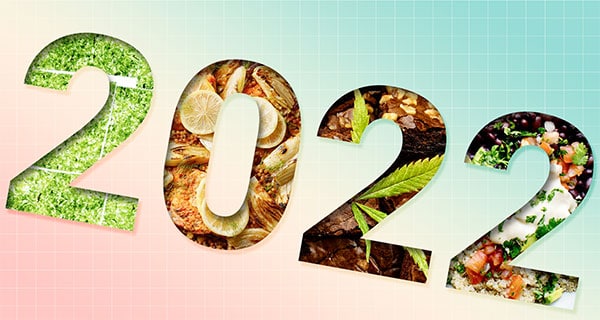 Food development in 2022 will have fewer animals, but more plants as well as a wide-ranging ‘mindfulness’ about food. Insights with an American slant…

The Covid pandemic played a huge role in our product development outlook last January. It couldn’t play a starring role a second time, could it, asks FoodProcessing.com?

While that remains a rhetorical question as the virus stubbornly hangs on and new variants pop up, American and Canadian life is nonetheless finding its way back to normalcy – and not that “new normal” we talked about last year. Restaurants, theatres and live events are back in business, although those dining occasions don’t seem to be harming any food and beverage processors (and certainly are helping a few).

Americans and Canadians apparently are continuing to cook at home, but they appear to be looking for familiarity and convenience. The beneficiaries remain the big food and beverage companies with in-store sales of trusted brands and pantry staples.

The smaller companies, which have been chipping away at Big Food’s sales for a decade, are mostly privately held, so there’s no way to tell how they did last year. But the conventional wisdom is, during trying times, people look for familiarity, simplicity and economy in their food purchases, and that seems to favour Big Food.

Rather than swing for the fences (and possibly strike out) Kraft Heinz developed Flavor Boosts, seasoning packets to spice up its boxed macaroni & cheese dinners (sales of which soared during the pandemic). Flowers Foods added seeds to Dave’s Killer Bread. Hostess added a mixed berry cream filling to Twinkies.

Nothing groundbreaking there, no category-creating products, but artful additions to products that already were doing well because of the pandemic.

Nevertheless, there were some truly novel product categories that had stellar years in 2021 and may (or may not) carry their successes into 2022. Let’s look at some of them.

Could anyone back in 2019 have predicted the wild popularity of hard seltzers? Likewise, could anyone have predicted that every Tom, Dick and Coca-Cola would jump on that bandwagon, flooding the market at the same time overall sales were plateauing?

Hard seltzers seemed destined for a moderate run even without the pandemic. But this category, which features low sugar, low carbs and low alcohol as well as at-home consumption and gender neutrality, seemed to get quite a boost from the first year of the pandemic. As a result, many new companies jumped in, and the original players planned for soaring sales.

Boston Beer Co, with its Truly Hard Seltzer brand, was one of the originals. Expecting the continued meteoric growth of the category, the maker of Samuel Adams beer overbought ingredients, cans and other supplies for the product. Then Truly sales sagged at mid-year 2021. As a result, the company destroyed “millions of cases” of Truly before the taste was compromised.

Now Boston Beer Co is being hit with lawsuits from investors, who claim the company misrepresented how its seltzer products were selling.

Whether hard seltzers stick around forever or they become the 2020s equivalent of wine coolers, a shakeout looks imminent. Grand View Research as recently as December predicted the market will grow at a compound annual rate of 31.4% from 2021 to 2028. Whether you believe that forecast or not, there are no shortage of competitors. Enter the category with caution.

Plant-based foods, while they are here to stay, are not the juggernaut they were two years ago – also partially the victim of a saturated market. Although sales of plant-based analogue proteins are still rising, the growth is slowing down, according to recent figures from IRI: Sales were down 3.1% for refrigerated analogue meats in the third quarter of 2021 compared with last year. (To put it in context, though, sales were up 74% against the same period in 2019.)

Beyond Meat, one of the two pure-play alt-proteins companies in the US, reduced its sales forecast for the third quarter to $103-million, down from $120-140-million. Beyond Meat mostly blamed supply chain disruptions for the sales drop but also acknowledged that consumer demand hadn’t been as big as anticipated.

Now it’s hard to find an animal protein company that isn’t making an analogue product. The slowdown and competition have at least one major competitor rethinking its investment. “We are seeing a marked slowdown in the plant-based protein category performance, which may suggest systemic change in the extremely high growth rates expected by the industry,” Pres/CEO Michael McCain said in explaining an unexpected drop in Maple Leaf Foods’ Plant Protein Group sales.

While the company’s meat sales grew handsomely in the third quarter of 2021, plant-based sales declined by 6.6% to $48-million, and they were down 12% through nine months. “We have always been prepared to re-examine that investment thesis if circumstances change,” McCain continued. “Given current category performance, such a review is underway, which will either affirm or adjust our strategies and investment thesis going forward.”

While veggie burgers may be plateauing, there are other animal-free replacement categories that are growing. While egg replacements have been around for a while, Eat Just may have turned it up a notch with its Just Egg product. Mung bean protein isolate is the key ingredient, but there’s a long list of ingredients, many of them not so natural.

Likewise, soy milk for years has put a dent in the dairy category, but now almonds, oats and other protein ingredients are taking over the alt-milk category. There’s even an-animal-free replacement that claims to be a ” true dairy” product.

Last year, Perfect Day Foods claims to have produced “the world’s first real milk proteins made without animals” using microbial fermentation. The company inserts milk protein genes into the DNA of microflora — in their case, fungi — which convert plant sugar into whey and casein, milk’s main proteins. Once separated from the fungi and remaining sugars, the proteins are dried into a powder, which is then reconstituted with water, vitamins, minerals and plant-based fats and sugars using the nutrient proportions in cow’s milk.

A tangential category that’s picking up steam is cultured meats. Not long ago, the subject seemed like it would take years, maybe decades, to develop. But last year, “1880,” a restaurant in Singapore, began selling lab-grown chicken (mixed with a lot of vegetable protein) from aforementioned Eat Just.

In our mid-year report on the subject, we found 26 companies around the globe working on cultured meat products – and by “meat,” we mean not just beef but chicken, pork, seafood and duck. As in the plant protein category, some of the big names in animal protein – Tyson, JBS, Cargill, as well as Nestle – are investing in these companies.

Cost seems to be the hurdle, but the price is tumbling. Mosa Meat, based in Netherlands, claims to have first cultivated a beef burger from cells in 2013 at a cost of $280,000. Israel’s Aleph Farms in 2018 reported one serving (they didn’t specify the size) of steak cost $50 to produce; and with the April 2020 completion of its first pilot BioFarm, that price is tumbling.

“As Aleph scales its BioFarms, the cost per steak will reach parity with slaughter-based meat within a few years,” says a spokesperson. Aleph plans to launch its first consumer product, a thin-cut beef steak, this year, first in foodservice and then in retail.

Rahim Rajwani, co-founder of Vancouver’s Atelier Meats, predicts future Christmas dinners will feature cultured meat. “Lab-grown meat is a protein solution for health-conscious consumers wanting a guilt-free Christmas dinner. [Another] advantage of cultured meat is the ability to custom design protein options, which includes deciding the percentages of protein and fat, or the degree of marbling.”

Ready or not, cultured meat is here.

Whether you’re following the keto diet, the paleo diet or another regimen, many of them have in common an avoidance of carbohydrates. Carbs have been getting beaten up in recent years, with perhaps the final cut being the requirement to call out Added Sugars on last year’s updated Nutrition Facts panel.

While it sounds counterintuitive, the keto diet keeps gaining followers and, as a result, new products. While much has been made of its fondness for “good” fats, carb avoidance is just as important a principle.

“Keto” is in letters as big as the company name on most Catalina Crunch products. Following lines of low-carb cereals and cookies, the company last year debuted savoury Crunch Mixes. They look like Chex Mix, but the mini pretzels are made of chickpea and the main ingredient in the cereal squares is “Catalina Flour” – pea protein, potato fibre, non-GMO corn fibre, chicory root fibre and guar gum.

The Better Bagel last year turned one of the most carbohydrate-heavy foods into the net carb equivalent of half an orange or a fifth of a banana. It’s key ingredient, modified wheat starch – instead of flour – is indigestible in the upper GI tract and not absorbed by the body.

Speaking of not being absorbed by the body, allulose is enjoying popularity as a sugar replacement. It’s a “rare sugar,” found in small quantities in fruits and grains, provides 70% the sweetness of sucrose with a similar taste profile and functional properties. But it contributes just 10% of the calories of standard sugar. As a result, the FDA ruled it can be excluded from the “Added Sugars” line on nutritional labeling, but it still must be included in the amount of total carbohydrates.

Whether they appeal to one of the fad diets or just want to make a low-carb claim, look for more products to reduce carbohydrates this year.

There are dozens of social issues and causes being pursued by different food and beverage companies; collectively they acknowledge a certain “mindfulness” among consumers.

Whether your particular passion is feeding the hungry here or around the world, climate change, animal treatment, diversity and inclusiveness or one (or more) of the countless other movements, people are showing concern for causes; and since these people are also consumers, their causes sometimes impact their buying decisions.

First comes the talk, or at least press releases, from the food and beverage processors: a commitment to reach zero carbon emissions by 2050 (Mondelez); replenishing more water than you use by 2030 (PepsiCo); switching to packaging that’s recyclable, reusable or compostable by 2025 (Saputo). Et cetera.

In terms of what product development can do, maybe must do, to further the corporate cause, it may mean finding cocoa from sustainable sources, other global ingredients (cocoa, vanilla) that don’t use child labour, maybe even upcycling imperfect produce, process byproducts or other ingredients that otherwise wouldn’t make it to the market.