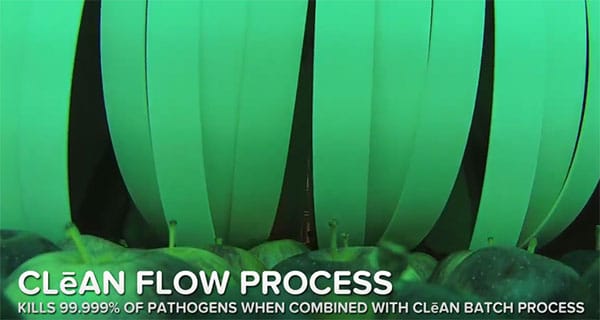 Clēan Works is a Canadian company that has developed a new innovative technology that cleans food without using water. It claims the process represents “a paradigm shift in the way food products are cleaned”.

“Our process, with our strict operating procedures, gets rid of almost all contaminants, bacteria and pathogens on food,” says Paul Moyer, co-owner of Clēan Works that’s based in the Niagara Region of Southern Ontario.

“It reduces health risks by making fruits and vegetables safer to consume, increases their shelf life, and saves significantly on water.”

Clēan Works launched its product on the eve of World Water Day which fell on March 22, a day coordinated by UN-Water – the United Nations inter-agency for all freshwater-related issues.

“This aligns perfectly with what we are doing at Clēan Works,” says Mark VanderVeen, President of Clēan Works. “Our waterless process helps clean fruits and vegetables to much higher levels of sanitation than traditional systems. It’s all about making the world a better place.

“We understand the effect our process can have on the agri-food industry. It is game changing, here in North America and for the developing world.”

Moyer is a 9th-generation farmer in the Niagara Region whose family has been working the land since 1799. He co-founded Moyers Apple Products which won recognition as an innovator when it received the 2017 Premier’s Award for Agri-Food Innovation Excellence from the Government of Ontario, and in 2018 it won an Ontario Centre of Excellence award.

While water alone is only around 50% effective, this process is up to 99.9% effective under the specific conditions. It has been validated by the Food Science Department at the University of Guelph, Canada’s leading agri-food institution.

The method is organic and waterless, and can take less than 30 seconds. Using ultraviolet light and vaporised hydrogen peroxide to kill up to 99.9% of pathogens like Listeria, based on Clēan Works’ controlled operating procedures, it also allows for compliance with regulations. It kills pathogens which create health risks. Using the process, Moyers Apple Products has seen the shelf life of its products increase by up to 25%.

Dr Keith Warriner, a University of Guelph food scientist who is considered one of Canada’s top authorities in the field, said this takes cleaning to the “microbiological level”. Benefits accrue for the entire agri-food industry, he stresses – growers, packers, processors, wholesalers, and retailers.

“Clēan Works is attracting attention as its innovation moves from lab to market as farmers, processors and retailers learn of this remarkable sanitizer,” says Moyer.

He concludes: “Finally, there’s a scientifically validated alternative to washing. I think of Clēan Verification as a firewall between the field and the dinner plate.”