07 Feb 17 Nestlé: How to grow in a rapidly changing food world 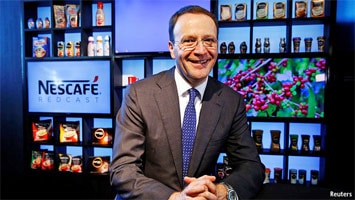 What’s the world’s biggest food company to do in the face of changing consumer tastes and a shifting retail landscape? The Economist investigates….

LARGE food companies have long been among the world’s most solid, with reassuringly consistent returns even in hard times. None would seem steadier than Nestlé, based in the Swiss town of Vevey, on a lake near snowy peaks.

For its 150th anniversary in 2016 it opened a new museum filled with corporate heirlooms: the first written notes about a new product called milk chocolate, laid out in black cursive; an old tin of Nescafé, used by soldiers as a stimulant in the second world war; and an early can of Henri Nestlé’s infant formula, which in 1867 saved the life of a premature baby.

It has come a long way since then. It sold goods worth nearly $90bn in 189 countries in 2015. Of the 30,000 cups of coffee sipped around the world each second, Nestlé estimates, one-fifth are cups of Nescafé.

But the industry it presides over is in upheaval. On January 1st a new chief executive, Ulf Mark Schneider (above), took over. He is the first outsider to get the top job since 1922, and his background—running a health-care firm, not selling chocolate bars or frozen pizza—suggests the main source of worry for the business.

From 2011 to 2015 big sellers of consumer-packaged goods, mainly food and drink companies, lost three percentage points of market share in America—a lot in the industry’s context—according to a study by the Boston Consulting Group, a consultancy, and IRI, a data provider.

As super-sized companies swat at such tiny attackers, another foe is gaining ground. 3G, a Brazilian private-equity firm, likes to buy big, slow-growing food and drinks companies and slash their costs. Targets have included Kraft and Heinz, two giants which 3G helped merge into one group in 2015, as well as several of the world’s biggest brewers.

Other food companies are scrambling to make cuts of their own, lest they become 3G’s next meal. That has prompted a debate over whether such cuts wreck firms’ growth prospects even further, or whether, in fact, they are best off wringing out profits and accepting that robust expansion is a thing of the past.

Nestlé is not immune to such pressures. In recent years it has often missed its goal of 5-6% sales growth. Excluding acquisitions, its numbers have not met investors’ expectations for 11 of the past 17 quarters. In the most recent quarter, the firm registered organic sales growth of 3.2%.

Changing consumer tastes explain some of these shortfalls. So does a shifting retail landscape. Managing a giant portfolio of brands, from KitKat and Nespresso to DiGiorno pizza and Purina dog food, has become harder.

Mr Schneider will have to master online ways to market and deliver its well-known brands. The firm needs to coax customers to pay more for premium products as ordinary ones get commoditised, and discounted by firms such as Germany’s Lidl and Aldi.

The Economist: Read the full story

Health-focused Nestlé will always be home to KitKat: chairman

Nestlé chairman’s vision for a new kind of diet