International Flavors & Fragrances has agreed to buy DuPont’s nutrition and biosciences business for $26.2bn, the latest acquisition by the New York company as it seeks to become a major supplier to the consumer goods industry.

The deal will create a giant in the flavourings and nutrients industry, providing ingredients for products from vegan burgers to salad dressing to laundry detergent. The combined company will have an enterprise value, which includes debt, of $45.4bn, with annual revenues of about $11bn.

IFF beat Ireland’s Kerry Group in the auction of the DuPont unit. The unit will be spun off and merged using a Reverse Morris Trust structure that means DuPont’s shareholders will not have to pay tax on the deal.

The company will be run by Andreas Fibig, IFF chief executive. If the transaction is approved, DuPont shareholders will also share in a $7.3bn special cash payment.

“This is not about scale,” Fibig, told analysts. “This is about first-mover advantage to redefine our industry and deliver what our customers demand.”

DuPont is a leading vendor of the cultures, enzymes, soya proteins and probiotics that underpin consumer food trends, according to Fibig, while IFF’s edible offerings have been focused on taste, colour and food protection.

The merged businesses would extend their wares beyond food vendors to also supply the pharmaceuticals and consumer products industries such as laundry detergent that could contain both DuPont’s enzymes for removing stains and IFF’s scents.

The enlarged group is targeting about $300m of cost savings within three years of the tie-up. The two companies have a combined headcount of more than 23,000 employees and more than 180 manufacturing sites.

Ed Breen, chairman of DuPont, will become the lead independent director on a 13-person board, of which seven will be appointed by IFF and six by DuPont.

The latest deal comes a year after IFF agreed to acquire Frutarom Industries, an Israeli flavour maker, for $7.1bn including debt, part of its plan to consolidate the food flavouring sector.

The industry is dominated by four major companies — Givaudan, Firmenich, IFF and Symrise — which provide flavours and fragrances for use in food, beverages and pharmaceuticals. Sales have enjoyed steady growth in recent years as big consumer goods companies scramble to meet rising demand for natural, rather than artificial, scents and flavourings.

The deal is the latest in a series of transactions involving DuPont. The old conglomerate merged in 2017 with Dow Chemical, but was split this year into three businesses. One retained the name DuPont, of which the nutrition and biosciences was part — until the deal announced. 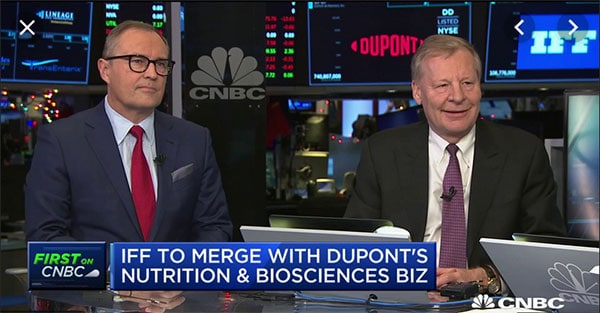