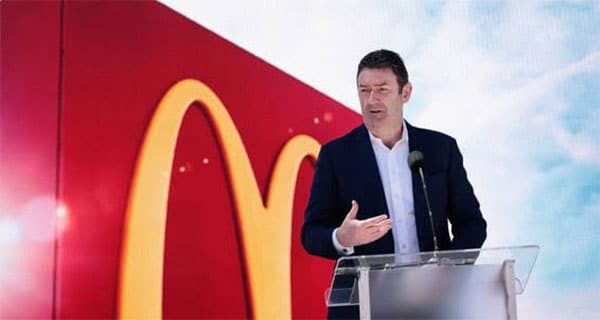 McDonald’s has fired its highly successful chief executive, Steve Easterbrook, after he had a relationship with an employee.

The British boss of McDonald’s is set to walk away with a pay package worth up to £21-million ($27.05-million) after being sacked for having an affair with a colleague.

McDonald’s policy bans management staff from having relationships with those who report to them.

Steve Easterbrook, 52, who is divorced, admitted that he had showed ‘poor judgment’ after starting a consensual relationship with a fellow employee.

The identity of the other person remained shrouded in mystery last night as the Watford-born high-flyer lined up PR teams on both sides of the Atlantic, including a crisis management lawyer in the US who specialises in ‘celebrity disgrace events’.

The scandal marks the end of Easterbrook’s successful four-year spell in charge of the company, during which he almost doubled its market value.

Appointed chief executive of McDonald’s in 2015, Easterbrook is widely credited with revitalising the firm’s menus and restaurants, by remodelling stores and using better ingredients. Under his leadership, McDonald’s also expanded its delivery and mobile payment options to emphasise convenience.

No reasons were given for the departure of 51-year-old David Fairhurst, who comes from Wigan and relocated to the US under Easterbrook as both men rose through the company’s ranks.

Easterbrook was dismissed swiftly by the McDonald’s board as his ‘recent consensual relationship’ came to light.

The divorced father-of-three then sent an email to all staff admitting that his behaviour fell short of the standards expected.

He wrote: ‘Given the values of the company, I agree with the board that it is the time to move on.’

The love life of the man who grew from branch manager to company chief rocked the global fast-food giant, wiping £3.4-billion off its market value yesterday.

But according to filings submitted in the US yesterday, his contract was deemed to have been terminated ‘without cause’.

This means he remains eligible for previous bonuses due to pay out over the next three years. So if McDonald’s hits its yearly targets, he is line to receive a bonus worth between £1.8-million ($2.32-million) and £3.7-million ($4.76-million).

As part of the deal, Easterbrook has signed a gagging order agreeing not to say anything that ‘disparages or damages’ McDonald’s reputation. He is also banned from working for a rival, such as Burger King or KFC, for the next two years.

Not many CEOs are credited with having as much impact as Steve Easterbrook had in his four years leading McDonald’s. During his tenure, the fast food giant nearly doubled its share price, and many analysts say he modernized the company when it was in danger of decline.

None of that success could protect his job after he apparently violated a company-wide policy that barred supervisors from having relationships with subordinates.

Experts say the company had no choice but to enforce this policy. Especially since the start of the #MeToo movement, companies have been under increased pressure to show that they’re cracking down on all forms of sexual misconduct — and that now they need to show that no one is exempt, even successful C-suite executives….