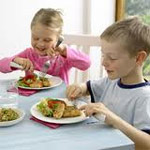 A survey by Sainsbury’s has found that kids dictate what the whole family eats, with eight in ten mums (77%) admitting that their children are the meal maestros at dinner time.

And while 80% of families find time to sit down regularly for a meal, around 350 000 never eat together as a family. The study – carried out by Netmums for Sainsbury’s Active Kids Get Cooking scheme – revealed 70% of mums are convinced their children know more about cooking than they did at the same age.

Around one in ten mums admit they don’t teach their children how to cook. When asked what puts them off teaching kids how to cook, 14% of all parents admitted they hate the mess, 32% have no time and 9% admit they don’t have the skills to pass on. A health and safety conscious 13% – around two million families – say that cooking at home would be too dangerous for children.

They will be looking for the best children’s recipes with the theme of ‘family favourites with a twist’.

The Sainsbury’s survey also found that ‘meat and two veg’ is the most popular home cooking choice, as 75% of parents today say it’s the favourite weekly meal. This traditional option was also number one in their own childhoods. Just 4.5% of parents serve chips as a weekly favourite, while a generation before, the ‘chips with everything’ option was three times as popular (13%).

Today, pasta has replaced the fried  potato, with five times more families eating the dish now than a generation ago.