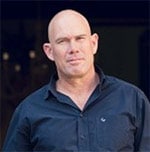 “GG” or Marc Alcock (left) goes where few white men have dared. With a string of marketing triumphs under his belt, he and his marketing company, Minanawe, have gained startling insights into the ways our many millions of black South Africans eat, dress, party, clean, entertain and die.

This is a fascinating story, and one that includes Parmalat’s unlikely triumph in making one of its most premium products a “bottom-of-the-pyramid” winner.

GG Alcock’s name says it all. GG was the number plate on apartheid-era government vehicles — an invidious presence that loomed large in his childhood in rural Zululand.

The nickname given to Marc in the village of Msinga, “now officially declared the poorest and worst place to grow up in KwaZulu-Natal”, he says, has stuck.

So too has the culture, and the language, enabling the flamboyant marketer, who has spent 20 years working in the informal sector, to walk with and talk to shack dwellers, spaza owners, housewives, taverners, hawkers and taxi drivers.

Alcock has immersed himself and his specialist marketing company, Minanawe (Zulu for “you and I”), in the huge and all-too-often invisible economies of the townships. He’s carved out a niche that attracted the attention of Publicis, the world’s second-largest advertising and communications group.

“They recently bought us. We still operate independently, but this gives us the scale and ability to work across the huge emerging market that is Africa. Naturally, we will continue to focus on the informal sector, about which I’m so passionate.”

The former apartheid ghettos, locations, lokasies or ekasi, were off limits to big business until democracy in the 1990s. But Alcock has gone where few white men have dared. His researchers have gained startling insights into the ways many millions of black South Africans eat, dress, party, clean, entertain and die. 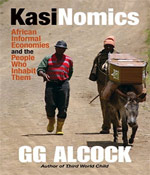 Alcock vividly captures this in his new book, KasiNomics, which is essentially about his business and his life. As a home-schooled youth who had grown up herding goats and learning to be a man under the guidance of Zulu elders, when he arrived in Johannesburg he had no apparent skills.

Like many a migrant Zulu, he slept in shacks and hostels, driving trucks and struggling to make a living. Today his insight, research and marketing have created megabucks for some of SA’s most iconic brands.

Minanawe built a beach, with bikini-clad models, in Soweto to launch a liquor brand there. Alcock created The Perfect Sishebo, “arguably SA’s most popular TV reality cooking show” on which his client Unilever showcases its products used in the iconic African stew.

Parmalat briefed Minanawe to explore the township school lunchbox market. But Alcock had other ideas, hauling the dairy company’s brand team into Soweto to see the huge market for kota. The hollowed-out quarter-loaf is filled with ingredients from slap chips to polony and atchar. Alcock suggested adding Parmalat processed cheese slices. The melting cheese was an instant success in kotas and vetkoek.

“Parmalat generated hundreds of millions of rand in sales in an invisible market, one hotly contested today by all the dairy industry players.”

Another of his marketing triumphs was for disposable nappy manufacturer Huggies, after the company asked Minanawe if there was an opportunity for single sales…..

“TO enter and be successful in marketing and selling products to [these] invisible markets the trick is to minimise the risk of investment through knowledge and information.

Sadly, there are no research documents from esteemed universities or surveys by market researchers, so business people need to do this the old-fashioned way – grab a taxi, shay’iround (visiting places), get their shoes dirty treading the dusty streets of ekasi and emalalini (villages) or maybe paddle down the Tugela to talk to dagga growers.

It is with the dagga lesson in mind that I approach the launch of Parmalat Individually Wrapped Cheese Slices first in the Soweto market and later throughout Southern Africa.

This is a premium product, a slice of processed cheese wrapped in a plastic sleeve, and not the kind of product one would expect would gain any traction in the lower end retail sector, let alone in the informal spaza sector.

Who could imagine that we could create an entire product category now worth approximately R1bn in South Africa?

Launching this improbable product into the township takeaway market allowed Parmalat to generate hundreds of millions of rand in sales in an invisible market, a market which is now hotly contested by all the dairy industry players in the business.

Today it seems as if everyone is falling over themselves to get their cheese slice into a kota or a vetkoek…..”

GG Alcock’s background makes him an ideal bridge between South Africa’s two economies. Author of Third World Child, an autobiography about growing up in rural KZN, he migrated to Johannesburg where his marketing company, Minanawe, offers a way for First World businesses to access the bottom end of the pyramid.

In this fascinating interview GG tells us about the business opportunities in a wide range including Kota’s, funeral policies and Stokvels which he elaborates on in his upcoming book, KasiNomics. A book that offers a long-overdue focus on hidden sectors of SA’s thriving informal economy.

BizNews.com: Read or listen to the interview

About KasiNomics and GG Alcock

“Kasinomics is a book as eclectic, mysterious and colourful as the places and people it explores.”

eKasi, the lokasie, the South African township, once an apartheid ghetto, is today an amazingly transformed place. This township today is an eclectic mix of mansions, shacks, spaza shops, rocking taverns, hawkers, taxis and hot wheels. In this kasi there are vibrant businesses, energetic people, a tightly networked social community and abundant hope.

That is not to say there isn’t extreme poverty, suffering and dissatisfaction, particularly on the peripheries in the huge shack settlements, but to paint the place as a slum is a massive mistake.

KasiNomics attempts to cast a light on the invisible matrix at the heart of South Africa’s informal economies and the people who live in them. Living and doing business in African marketplaces requires an ethos uniquely suited to the informal, to the invisible, to the intangible.

KasiNomics will take you down those rural pathways, weave between claustrophobic mazes of shacks, browse a muti market, visit a spirit returning ceremony and save money with gogo in a stokvel, among many more people and places.

After almost 20 years of focusing on marketing to the informal sector, GG Alcock, CEO of specialist marketing company Minanawe, showcases a number of groundbreaking and very successful case studies in this invisible informal world. His vivid anecdotes and life experiences and how they link to understanding and inspiration for business ideas will make you gasp, laugh and shake your head in wonder.

GG Alcock, and his brother Khonya, are the sons of Neil Alcock (who was murdered when GG was 14) and Creina Alcock, who still lives in the Msinga Valley, continuing GG’s father’s work among the Zulu people.

GG and his brother were home-schooled, under an acacia tree, by their mother until the beginning of standard six when the Department of Education forced them to go to “real school”. He completed his schooling at a local government boarding school in Greytown, hating every minute of it. Following school he completed his two years military service, where he challenged township duty and faced the inevitable consequences.

After army GG worked for a number of anti-apartheid activist organisations on legal challenges to the Land Act (where black people were dispossessed of their land). During this time he grew a fairly high political profile in the media and government circles of KwaZulu-Natal.

With the changes brought about by the unbanning of the ANC, GG moved into business and is currently the CEO of Minanawe Marketing (a very successful agency focused on marketing to the mass market, rooted in consumer understanding).

GG is 46, very happily married, and has two very beautiful blonde daughters who he will be expecting lots of lobola for one of these days, and lives in Joburg.

He loves Africa and being African, and his staff are convinced that he never works but spends as much time as possible on one or other adventure – motorcycling across deserts and mountains, mountain biking, paragliding or kayaking.

“It’s not true,” GG says, “I don’t spend enough time doing this!” Having realised from an early age that there is no glamour in poverty GG is trying very hard to grow his collection of adventure toys!