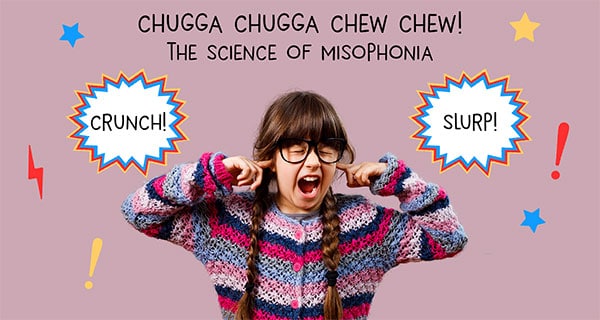 Are there certain sounds that really drive you crazy, like someone chewing or swallowing? Beyond mere frustration or annoyance, sounds that trigger uncontrollable feelings of anger and disgust? If so then you quite possibly suffer from a disorder known as misophonia.

The condition was first proposed around 20 years ago, and in 2013 a trio of Dutch researchers formally presented specific diagnostic criteria in an attempt to officially classify it a psychiatric disorder. Despite a growing body of research misophonia is not yet considered an official psychiatric condition.

Misophonia is characterised by certain sounds triggering immediate physical aversion. The majority of misophonia cases studied link the condition primarily to oral sounds such as breathing, chewing and swallowing. But the condition can also be triggered by tapping, clicking and fidgeting sounds, often associated with human movement.

An influential 2017 study investigating the neurological basis of misophonia found trigger sounds were associated with increased activity in the anterior insular cortex, a region of the brain involved in processing emotions.

The hypothesis suggested misophonia involved hyperactive dysfunction in certain brain regions, but not everyone was convinced. In fact some of the Dutch researchers who presented the first diagnostic criteria for the condition in 2013 claimed this study was filled with shortcomings.

This new research, led by the same team from Newcastle University responsible for the 2017 study, began with the observation that eating and chewing seem to be consistently reported as triggers for misophonia.

“What surprised us was that we also found a similar pattern of communication between the visual and motor regions, which reflects that misophonia can also occur when triggered by something visual,” says Sukhbinder Kumar, lead author on the study.

“This lead us to believe that this communication activates something called the ‘mirror system’, which helps us process movements made by other individuals by activating our own brain in a similar way – as if we were making that movement ourselves.”

The mirror neuron system was discovered back in the 1990s by a team of Italian scientists. Certain parts of a monkey brain were seen to spark neuronal activity both when the animal performed an action and when it observed another animal performing that same action.

Over subsequent years similar “mirror system” brain activity has been detected in humans. However, some researchers argue mirror neuron systems in humans have yet to be clearly proven.

Kumar and the team behind this new research admit their findings are still deeply hypothetical since there is no direct neuroimaging evidence of mirror neurons in humans. Current MRI technology is too coarse to clearly zoom in on the activity of single neurons, but the mirror neuron misophonia hypothesis is compelling nonetheless.

“We think that in people with misophonia involuntary overactivation of the mirror system leads to some kind of sense that sounds made by other people are intruding into their bodies, outside of their control,” says Kumar.

“Interestingly, some people with misophonia can lessen their symptoms by mimicking the action generating the trigger sound, which might indicate restoring a sense of control.”

Tim Griffiths, senior author on the new study, says future work will investigate whether different kinds of therapy focusing on how the brain represents movement could be effective treatment for misophonia. Current methods such as sound therapy and exposure therapy are often deployed to help misophonia sufferers.

“The study provides new ways to think about the treatment options for misophonia,” says Griffiths. “Instead of focussing on sound centers in the brain, which many existing therapies do, effective therapies should consider motor areas of the brain as well.”

The new study was published in The Journal of Neuroscience.