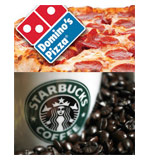 Since Taste Holdings CE, Carlo Gonzaga, opened his first Scooters pizza store 16 years ago he has always thought big. But there is market concern that in taking on Domino’s Pizza and Starbucks, two global heavyweight brands, in one shot he has bitten off more than he can chew.

The market has left no doubt about this concern, wiping almost two-thirds off Taste’s share price since July 2015.

Living up to sombre expectations, in the six months to August, Taste dished up a headline loss of R33.7m (9c/share), R4m up on a R29.7m loss a year earlier.

When Taste took on Domino’s in April 2014 and Starbucks 15 months later it meant mega-capex lay in wait. Taste started burning cash at a scary rate. R480m raised in three rights issues since 2014 has been gobbled up. Taste has also accessed R253m of a R1bn medium-term note programme it listed in 2014.

And the debt level keeps on rising. At the end of August long and short-term debt of R305m was up R17m on a year earlier while cash on the balance sheet had dwindled from R203m to R89m. It left Taste nursing net debt at 35% of shareholders’ funds, a level three times higher than a year earlier.

With scant chance of Taste soon returning to meaningful profitability, Vunani Securities analyst Anthony Clark warns in a research piece: “Taste is running out of cash.”

In theory Taste could turn to the market for more debt under its note programme. But lenders cannot be relied on to be waiting with cheque books at the ready — more so given Taste’s probability of defaulting over the next year. According to Bloomberg, this has risen over the past 12 months — from about 0.25% to 2.49%.

Taste’s predicament could, Clark believes, lead it to turn again to shareholders for extra capital through a rights issue. The operational execution of the complex Starbucks rollout is to Taste’s credit.

“Results are materially ahead of expectation,” says Gonzaga of monthly sales of R2.25m being generated by each of the first two of three stores opened in Gauteng since April.

“We open a fourth store next April and will break even at five stores.”

Starbucks stores do not come cheap. The three big-format stores opened came with price tags of R6m-R8m each, says Gonzaga.

Smaller-format stores, which will comprise the bulk of those still to be opened, will cost R3.5m-R4m each.

While things have gone according to plan with Starbucks, the same cannot be said about the Domino’s rollout…..