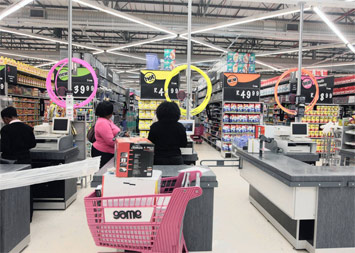 Masstores’ ambitions to increase the number of Game stores offering fresh produce received a major boost when the retailer succeeded in its appeal on Friday at the Constitutional Court to have the right to sell fresh produce at a Western Cape shopping centre.

Game’s entry into the fresh produce market has put the spotlight on the so-called exclusivity clauses in the lease clauses that various retailers have with their respective landlords.

In 2014, the high court interdicted Masstores, a division of Massmart, from interfering with a contractual relationship between Pick n Pay and listed property group, Hyprop, the owners of the CapeGate Shopping Centre in the Western Cape.

In dispute was whether Pick n Pay could prevent Game from selling fresh produce at the shopping centre.

Masstores took the matter to the Supreme Court of Appeal where it was dismissed. But on Friday, the Constitutional Court said Masstores did not violate any contractual agreement by trading as a supermarket.

Massmart spokeswoman Annaleigh Vallie said as a result of the Constitutional Court decision, the previous judgement in the High Court and Supreme Court of Appeal that favoured Pick n Pay had been over-turned with costs.

“This outcome represents an important victory in our on-going effort to undo the historical reliance that entrenched grocery retailers place on lease exclusivity clauses to limit competition in shopping malls.

“More specifically, we believe that the judgment will also significantly degrade the ability of the entrenched grocery retailers to rely on contractual and delictual arguments as a means to protect their lease exclusivity arrangements.

“The ruling creates a compelling context and momentum as we take our fight for free and fair competition in the grocery sector to the Competition Tribunal for the benefit of all new entrants,” Vallie said.

The decision on Friday came months after the Competition Tribunal rejected an application by retailers Shoprite Checkers, Pick n Pay and Spar to delay a hearing into Massmart’s application, in which it objected to exclusivity in lease agreements with landlords, the tribunal said recently.

The retailers told the tribunal that the complaint should be heard after the completion of the inquiry being conducted by the Competition Commission into the grocery sector.

In its reasons for the decision, the tribunal said a market inquiry was not an adjudicative process and would not deal with Massmart’s concerns adequately.