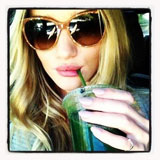 A moment of silence for the diet, please. It has died. Out of its withered ashes has sprung a new era of conspicuously clean consumption, driven by social media.

Evidence of dieting’s demise can be found on supermodel, Chrissy Teigen’s Twitter account. Teigen is the author of a bestselling cookbook called Cravings. Once upon a time supermodels didn’t write cookbooks, there being only so many ways you can combine cocaine and cigarettes in a quick and easy recipe.

But the internet has brought us closer to celebrities’ daily lives, which has given them more influence over ours. Teigen has used social media to build a personal brand around being a hilarious, approachable supermodel who likes food. She tweets things like “god I fucking LOVE BAGELS”, and you actually believe her.

All of which is to say that Teigen’s views on healthy eating matter; particularly to her 2.2 million Twitter followers and the 7.8 million on Instagram. She is not a dietician but she is an #influencer, which is basically the same thing.

And Teigen does not like diets. “I’ve always had an issue with the word ‘diet’,” she recently tweeted. “I like ‘eating light’ or ‘clean eating’ … I dunno why.”

I’ve got an idea why. Diets are no longer good for your personal brand. They mark you out as flawed, shallow and probably poor. Traditionally, diets have been a very formulaic means to an end: buy the latest diet bestseller, follow a highly prescriptive regime designed to maximise self-loathing and minimise calories, and lose weight. All in the hope that the new you will be deemed worthy by the thin crowd.

However, the price of entry to that club has now changed thanks to the advent of something called “wellness”.

The wellness trend is a product of a broader shift from conspicuous consumption to conspicuously considered consumption. The 80s and 90s were characterised by “bling”; you signaled wealth through flashy labels and big brands. In the 2000s, people started looking down their noses at ostentatious wealth and ushered in an era of “stealth wealth”, which became even more pronounced after the 2008 recession.

“If five years ago it was a Céline bag, today’s ultimate status symbol might just be a SoulCycle hoodie and a green juice,” wrote Vogue last year.

The moral dimension of wellness has grown as mindfulness has become more popular. Today, wealth-signaling is inextricably tied up with virtue-signaling. Sipping a green juice on the way to SoulCycle is not just a sign you have money, it’s a sign you’re spending that money on the “right” things. Modern wellness is all about nourishing your body and mind in Instagrammable, expensive ways.

It is asceticism disguised as aestheticism, and a traditional diet – focused on simply losing weight, available to anyone – doesn’t fit with this context. The rise of wellness also also ushered us into the era of “clean eating”, which eschews the prescriptive diet of old in favour of … well, no one is exactly sure, to be honest.

While clean eating has become a buzzword, very few people seem to be able to clearly define it. For example, nutritionist Tosca Reno, author of the Eat Clean Diet, says: “Eating clean is about choosing fresh, whole foods with all of their nutrients intact.”

Meanwhile nutritionist Mikaela Reuben explains: “Clean eating is a diet where you understand what you’re putting in your body.” And Eating Clean for Dummies says: “Clean foods are natural.” As for Teigen’s definition of clean eating, she went on to tweet: “By clean, I mean not Velveeta.”……

Clean eating and dirty burgers: how food became a matter of morals

The British have long associated delicious food with depraved indulgence, and now we have virtuous meals that are good for the soul. Is either attitude really healthy?