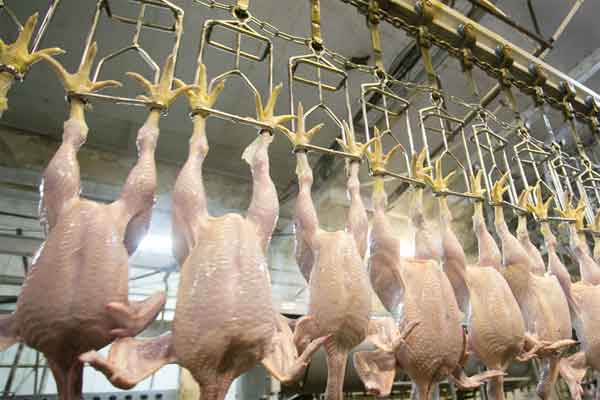 03 Aug 17 Chlorine-washed chicken: food safety expert explains why US poultry is banned in the EU

Brexit in the UK is posing many questions and uncertainties for its food industrialists. One topic that’s been in the news is the possibility of importing currently banned chickens from the US, and fears around their safety.

Why are people talking about chickens that have been washed with chlorine?

With Brexit on the horizon, the UK is now looking for ways to open up trade with countries outside the EU. A trade deal with the US is one of the most significant options politicians are exploring and an agreement that would increase imports and exports of food and drink could be an important component of this.

This has raised the possibility of the UK accepting US food standards, and a prominent example of this is the use of chlorine to wash chicken carcasses, which is currently banned in the EU.

Why are chickens washed with chlorine in the US?

It all comes down to money and efficiency of space. The majority of farmers do care about rearing their birds, but as profit margins can be very tight, animal welfare is sidelined to keep costs down. In the EU, cost is also important, but the law means it can’t come at the expense of the birds’ basic welfare. There is a legal minimum amount of space, lighting and ventilation for EU poultry rearing houses.

The more space the birds have to move around in, the fewer can be housed in a single area, which in turn has an effect on production costs. As there are no laws governing this in the US, the birds can be crammed in tightly so they have limited movement, with little light or ventilation. This reduces production costs but increases the risks of disease and contamination in a flock.

Washing the chickens in a strong chlorine solution (20-50 parts per million of chlorine) provides a brash, cost-effective method of killing any microorganisms on the surface of the bird, particularly bacteria such as species of Salmonella and Campylobacter. This helps prevent the meat being contaminated with microbes during slaughter and evisceration.

Why is the process banned in the EU?

US chicken has been banned in the EU since 1997 because of this chlorine washing process. But this isn’t because the treatment itself has been deemed dangerous.

A report by the EU Scientific Committee on Veterinary Measures, for example, highlighted that the chemical cleaning treatment can be effective at removing foodborne pathogens depending on how it is used. The real fear is that heavily soiled birds may not be sufficiently disinfected, and that relying on chlorine washing could lead to poorer hygiene standards overall.

EU officials believe the food industry should be continually improving hygiene standards in all steps of processing – the “farm to fork” principle, and so have banned chickens washed in chlorine as a deterrent to poor practices.

But in the US, there are no poultry welfare standards so the process is common. There have also been reports, including undercover video evidence by the Humane Society of the United States, of both inhumane and unsanitary practices being carried out within poultry houses due to a lack of animal welfare regulation.

What are the potential health risks of chlorine washing?

Although there are some benefits to this chlorine washing, there are concerns about it. Some US abattoirs and processing plants rely heavily on chlorination because their other hygiene standards are so poor that they would be illegal in Europe. The process is also very good at removing odours and surface slime, meaning the meat can be passed off as fresh for much longer than it should be.

Chlorine isn’t toxic at the levels used in the washing process and doesn’t itself cause cancer. But studies have shown that the treatment can cause carcinogens such as semicarbazide and trihalomethanes to form in the poultry meat if the concentration of chlorine is high enough.

The US Food Safety and Inspection Service does set limits to prevent this but there is always a risk they could be violated.

Is there much evidence to support the EU ban?

As a result, the EU introduced regulations laying down specific hygiene rules on the hygiene of foodstuffs. This prohibits the use of anything other than water to decontaminate meat and effectively bans US imports of poultry treated with antimicrobial rinses. However, the European Food Safety Authority has found no conclusive evidence that antimicrobial chemicals used in food processing contribute to antibiotic resistance.

If the UK started importing chlorinated chickens, wouldn’t consumers simply be able to choose whether or not to buy them?

Under current EU rules, the chlorine wash is classed as a processing aid rather than an ingredient and so wouldn’t have to be declared on the packaging. This means UK consumers would be unlikely to know whether imported US chicken had been through the chlorination process unless it was voluntarily declared. Of course, once the UK leaves the EU, it would be free to change the rules. But that doesn’t mean it necessarily would.