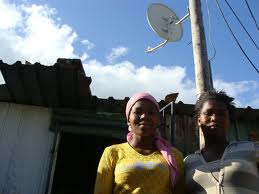 Are there really more than a billion people going to bed hungry each night? The Poverty Action Lab wanted to look at the reality of this UN estimate from 2009. It went to rural villages and urban slums and spoke to poor people and academic experts. “What we’ve found is that the story of hunger, and of poverty more broadly, is far more complex than any one statistic or grand theory; it is a world where those without enough to eat may save up to buy a TV instead, where more money doesn’t necessarily translate into more food, and where making rice cheaper can sometimes even lead people to buy less rice.”

It sounds politically incorrect but what if it’s not that the poor are eating too little food but eating the wrong kinds of food, depriving them of nutrients needed to be successful, healthy adults?

What if they aren’t starving, just choosing to spend their money on other priorities? Development experts and policymakers would have to completely reimagine the way they think about hunger. And governments and aid agencies would need to stop pouring money into failed programs and focus instead on finding new ways to truly improve the lives of the world’s poorest…..

…. THE INTERNATIONAL COMMUNITY has certainly bought into the idea that poverty traps exist — and that they are the reason that millions are starving. The first U.N. Millennium Development Goal, for instance, is to “eradicate extreme poverty and hunger.” In many countries, the definition of poverty itself has been connected to food; the thresholds for determining that someone was poor were originally calculated as the budget necessary to buy a certain number of calories, plus some other indispensable purchases, such as housing. A “poor” person has essentially been classified as someone without enough to eat.

So it is no surprise that government efforts to help the poor are largely based on the idea that the poor desperately need food and that quantity is what matters. Food subsidies are ubiquitous in the Middle East: Egypt spent $3.8 billion on food subsidies in the 2008 fiscal year, some 2 percent of its GDP. Indonesia distributes subsidized rice.

Many states in India have a similar program. In the state of Orissa, for example, the poor are entitled to 55 pounds of rice a month at about 1 rupee per pound, less than 20 percent of the market price. Currently, the Indian Parliament is debating a Right to Food Act, which would allow people to sue the government if they are starving. Delivering such food aid is a logistical nightmare. In India it is estimated that more than half of the wheat and one-third of the rice gets “lost” along the way. To support direct food aid in this circumstance, one would have to be quite convinced that what the poor need more than anything is more grain.

But what if the poor are not, in general, eating too little food? What if, instead, they are eating the wrong kinds of food, depriving them of nutrients needed to be successful, healthy adults? What if the poor aren’t starving, but choosing to spend their money on other priorities? Development experts and policymakers would have to completely reimagine the way they think about hunger. And governments and aid agencies would need to stop pouring money into failed programs and focus instead on finding new ways to truly improve the lives of the world’s poorest.

Consider India, one of the great puzzles in this age of food crises. The standard media story about the country, at least when it comes to food, is about the rapid rise of obesity and diabetes as the urban upper-middle class gets richer. Yet the real story of nutrition in India over the last quarter-century, as Princeton professor Angus Deaton and Jean Drèze, a professor at Allahabad University and a special advisor to the Indian government, have shown, is not that Indians are becoming fatter: It is that they are in fact eating less and less.

Despite the country’s rapid economic growth, per capita calorie consumption in India has declined; moreover, the consumption of all other nutrients except fat also appears to have gone down among all groups, even the poorest. Today, more than three-quarters of the population live in households whose per capita calorie consumption is less than 2,100 calories in urban areas and 2,400 in rural areas — numbers that are often cited as “minimum requirements” in India for those engaged in manual labor. Richer people still eat more than poorer people. But at all levels of income, the share of the budget devoted to food has declined and people consume fewer calories.

What is going on? The change is not driven by declining incomes; by all accounts, Indians are making more money than ever before. Nor is it because of rising food prices — between the early 1980s and 2005, food prices declined relative to the prices of other things, both in rural and urban India. Although food prices have increased again since 2005, Indians began eating less precisely when the price of food was going down.

So the poor, even those whom the FAO would classify as hungry on the basis of what they eat, do not seem to want to eat much more even when they can. Indeed, they seem to be eating less. What could explain this? Well, to start, let’s assume that the poor know what they are doing. After all, they are the ones who eat and work. If they could be tremendously more productive and earn much more by eating more, then they probably would. So could it be that eating more doesn’t actually make us particularly more productive, and as a result, there is no nutrition-based poverty trap?

One reason the poverty trap might not exist is that most people have enough to eat. We live in a world today that is theoretically capable of feeding every person on the planet. In 1996, the FAO estimated that world food production was enough to provide at least 2 700 calories per person per day. Starvation still exists, but only as a result of the way food gets shared among us. There is no absolute scarcity.

Using price data from the Philippines, we calculated the cost of the cheapest diet sufficient to give 2,400 calories. It would cost only about 21 cents a day, very affordable even for the very poor (the worldwide poverty line is set at roughly a dollar per day). The catch is, it would involve eating only bananas and eggs, something no one would like to do day in, day out. But so long as people are prepared to eat bananas and eggs when they need to, we should find very few people stuck in poverty because they do not get enough to eat. Indian surveys bear this out: The percentage of people who say they do not have enough food has dropped dramatically over time, from 17 percent in 1983 to 2 percent in 2004. So, perhaps people eat less because they are less hungry…..

www.foreignpolicy.com: Read more [and read the comments, too, on this provocative article]

Abhijit V. Banerjee and Esther Duflo direct the Abdul Latif Jameel Poverty Action Lab at the Massachusetts Institute of Technology and are authors of Poor Economics: A Radical Rethinking of the Way to Fight Global Poverty, from which this excerpt is adapted.