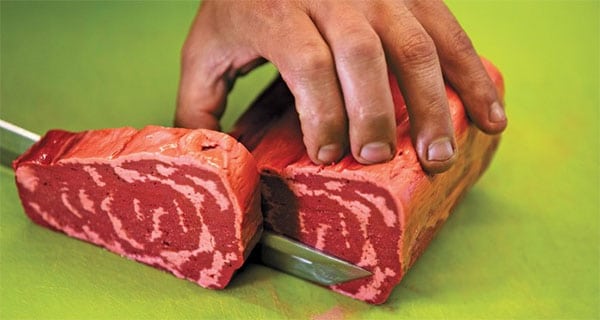 Engineers are fine-tuning 3D printers and materials for customisable cuisine and personalised nutrition. 3D printed foods promise new flavours, shapes and textures that could someday delight the most discriminating foodies.

Standard military rations are made in bulk, formulated to provide a complete packaged meal during field operations. But sometimes, soldiers need a specific nutritional fix to maintain peak performance — say, a jolt of caffeine for alertness on a mission during which sleep is scant, or a bolus of creatine to help with muscle recovery after an especially physically demanding assignment.

To achieve that level of culinary nimbleness, researchers at the US Department of Defense’s Combat Feeding Directorate, which develops military rations for the US Armed Forces, are turning to an unusual appliance: a 3D printer.

In the directorate’s Food Engineering and Analysis Lab, located at a US Army facility in Natick, Massachusetts, Lauren Oleksyk and her colleagues are creating 3D-printed bars tailored to optimize performance in specific scenarios or to address the needs of individual soldiers. Printers that create such supplementary rations could one day be synced with wearable sensors that detect a person’s physiological profile and nutritional needs in real time, she says.

Three-dimensional printers deposit bits of materials — usually plastics — through a nozzle onto a surface to build preprogrammed shapes layer by layer. Manufacturers and home hobbyists alike are using them to make customised machine parts, medical implants, furniture, and even guns.

Although 3D printing has touched many industries since its invention in the mid-1980s, the devices are in their infancy when it comes to printing food. In the past decade, researchers in academia and industry have been recasting the software and hardware for sculpting plastic to printing concoctions of peanut butter and other ingredients. At the same time, they have been wrestling with how to make food that can flow through the tubes of a 3D printer be as palatable as the traditional stuff.

In a sense, 3D printing isn’t that different from other types of food manufacturing.

“If you buy any packaged food at the supermarket, then you’re practically eating 3D-printed food already,” says Lynette Kucsma, cofounder and chief marketing officer at Natural Machines, which makes a food printer called Foodini. In many cases, food manufacturers already push food through machines and shape it.

But what’s different about 3D printing is that the end users maintain full control of what comes out of the machine, she says.

That’s why she and a handful of other experts in the technology envision a future in which 3D food printers are just another way to cook at home. “We do believe that in 10 to 15 years, 3D food printers will become a common kitchen appliance like your oven or microwave is today,” Kucsma says.

The promise of 3D food printing is big — not just for institutions like the army — says Hod Lipson, a robotics engineer at Columbia University. The method’s potential for customisation allows people to explore new culinary dimensions in their own kitchens, making tastes and textures that have never been created before.

For example, Lipson’s team recently printed a seven-ingredient slice of cheesecake with an elaborate internal structure. Because of the ways they constructed the layers, biting into the cake released the taste of each ingredient in waves, says Jonathan Blutinger, a graduate student in Lipson’s lab.

The transformative magic in traditional cooking comes from combining ingredients and applying heat at the same time, so the novelty of 3D printing food would be even greater if researchers can figure out how to print and cook simultaneously, Lipson says.

“We spend such a lot of our lives making food,” he says. “We broil; we panfry. Except for microwaves, [today’s cooking] is all techniques that are 1,000 years old.”

Lipson was among the first to explore 3D printing with food — and it wasn’t even on purpose. In the early 2000s, most 3D printers could print with only a single material at a time, but his team was trying to figure out how to print machine components such as batteries or actuators out of multiple materials.

To calibrate the printer for each material, Lipson’s students reached for food ingredients like cookie dough, cheese, and chocolate, which are easier to work with but have some of the same properties.

The food ingredients then “took on a life of their own,” Lipson says.

Initially, colleagues poked fun at the lab’s growing interest in food printing. But Lipson was drawn to the technological challenges. “I still have a hard time explaining this to my colleagues, but peanut butter is much more complicated [to work with] than aluminum,” he says. Its properties are not linear, and small fluctuations in temperature — even just a degree or two — change its rheological properties completely.

In 2006, Lipson colaunched the world’s first open-source 3D printer, called Fab@Home, which could be used for food, to encourage makers to experiment with the technology. Initially, Fab@Home and other early 3D food printers printed confectionary products such as cake frosting or chocolate because these foods’ consistency makes them so easy to pipe.

For 3D printers to become common kitchen appliances, though, the technology needs to mature. The hardware is pretty simple: it’s “literally a machine that can pick up a syringe of food and then shoot it out based on some kind of directed path,” Blutinger explains.

But there’s no standard software or hardware optimised for the specific challenges of printing food. “We’re using industry software designed for printing plastic and metal parts, and we have little hacks to make it work,” Blutinger says.

The field also needs to amass standardised digital recipes that home cooks could download and use in their 3D printers, the way that makers can download designs for making plastic toys or tools. At the moment, a chef who wants to print an hors d’oeuvre out of hummus and couscous with a garlic-sage glaze, or a beet-and-walnut cream cheese drop, would have to painstakingly develop a recipe from scratch….